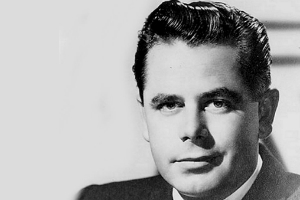 His first acting part was at age five after his family moved to Santa Monica, California, appearing in "Tom Thumbs' Wedding." He pursued acting from the time he was 14, working in five different theater groups at one time. "I did everything, I was a carpenter, sold programs, stage managed, painted scenery and acted. So when my opportunity came at Columbia, I was ready. By then I had appeared in 55 plays."

Ford signed a contract with Columbia in 1939 and appeared in a string on B movies. On 12/13/1942, he enlisted in the Marines and served in the South Pacific until 1945. His performance in "A Stolen Life" with Bette Davis in 1946 earned such critical acclaim that one year later he was cast opposite Rita Hayworth in "Gilda," a smash hit. "It was the start of everything."

Success followed with a steady stream of film roles in comedy, drama and, Ford's favorite genre, Westerns. Trained in horsemanship at 15 by humorist Will Rogers, Ford adapted to life in the saddle effortlessly. "I was once involved in cattle raising so when I do Westerns, it's like doing my own life. To be paid to do a Western -to ride a horse- I think is unbelievable."

Ford joined the Navy reserve in 1950 with the rank of Lieutenant Commander and was called to active duty in Viet Nam in 1968 as a lieutenant colonel. Serving as a briefing officer on new weapons on two 60-day tours, he was close to the firing line at five different battle sites. Refusing to take credit on his military service, insisting that countless others gave so much more, he turns his gratitude to his acting career. "I'm forever grateful that I'm able to make a living at something I enjoy so much."

Ford's first marriage, to dancer Eleanor Powell, ended in divorce in 1959. A second marriage in 1965 to actress Kathryn Hays had a similar conclusion. In 1977 his third marriage of seven years to model Cynthia Hayward ended in divorce after reports of alcohol abuse. He had one son with Powell and now has grandchildren. He accumulated a total of four marriages and a string of romances with much younger women. On 3/05/1993 at his home in Beverly Hills, he married his fifth wife, his nurse Jeanne Baus, in her early '30s. His best man was his only son, Peter, 42. The marriage lasted about two months.

He maintains excellent health and fitness with swimming, a high protein diet, and no tobacco or alcohol. He died at age 90 on August 29, 2006 at his Los Angeles home.