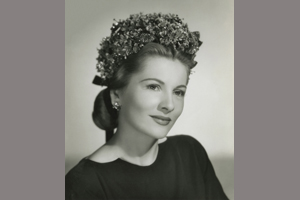 American actress who was born in Japan when her father was stationed in Tokyo. When her dad, an English professor, left her mom for the Japanese maid, her mom left Japan in 1919, when she was still a baby. She had a difficult childhood when her mom remarried, as she saw her family as critical and her sister Olivia as favored. At 15, she returned to Tokyo to live with her dad and his Japanese wife for two years.

Fontaine and her sister, Olivia de Havilland, both became noted actresses. From a debut both on stage and in film in 1935, her career developed slowly but her talent shone through, winning her an Oscar for "Rebecca," 1940. Actually shy, with a high IQ, she was considered difficult and was voted the least cooperative actress in 1943.

Fontaine married actor Brian Aherne in August 1939 and they divorced in 1944, the year that she made "Jane Eyre." By 1964, she made a fourth marriage, which also ended in divorce.