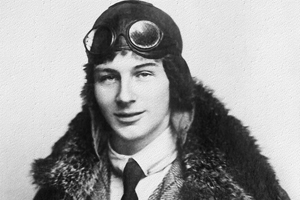 Anton Herman Gerard "Anthony" Fokker ( 6  April  1890 - 23  December  1939), born in Blitar (Java), in what was then the Dutch East Indies (now the Indonesia) is an aviator and entrepreneur Dutch in building of aircraft , founder of Fokker .

After building his first airplane, the Spin (Spider), at the age of 20 years, in Germany, in a dirigible hangar Zeppelin in Baden-Baden , he became famous during the First World War , founding his first company in 1912 , Fokker Aeroplanbau , building warplanes for Germany . Its engineers devised a mechanism for firing a gun across the field of rotation of the propeller (the shot was interrupted the passage of the propeller), authorizing the activity fighter car. The French Saulnier and Garros have developed a device for firing through the propeller but the Fokker, more efficient, is extended to all the fighters.

Because of the Treaty of Versailles, the Germans cannot build aircraft after the war. So he returned to the Netherlands to start a new company, Fokker in 1919, headquartered in Amsterdam. He became interested more in the civil aviation to the Air Force. He emigrated to the United States, became an American citizen in 1922, and established the American branch of his company Atlantic Aircraft. In 1927 he married Violet Austman in New York. Violet Austman dies in non-clarified a fall in a hotel the circumstances 8 February 1929.

Fokker died in three weeks in New York in 1939 of meningitis at the age of 49 years. In 1940 his ashes were returned to Driehuis where they are buried in the family vault.

His nickname was The Flying Dutchman