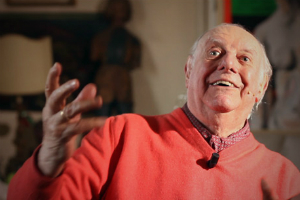 Italian writer, a radical playwright and winner of the 1997 Nobel Prize for Literature. A popular and controversial playwright, actor and director, he has earned international acclaim for his political satires and farces. Often considered the rightful heir of Aristophanes, Fo has led the field in political satire in Europe for over 30 years. The main targets of his ideologically inspired attacks have been capitalism, imperialism and corruption in the Italian government. For performances outside of Italy, his comedies are frequently adapted to reflect local political conditions.

The son of a railroad worker, Fo began his career as a performer in satirical cabaret-style revues. Later, he wrote, produced and directed a string of successful "bourgeois comedies." He has also written for and performed in several films. His one foray into television was as writer, director and co-star of Italy's most popular television series, "Canzonissima." The series was ultimately removed from the airwaves by the Italian government after Fo portrayed an episode about a 12th century Pope who was known for being particularly cruel by hanging monks by their tongues from the church doors when they didn't agree with him.

Fo was refused a visa to enter the United States during the 1970s and '80s under the McClaren Act. It was not until Robert Brustein and the American Repertory Theater invited him to perform in 1986 that he was finally granted entry. At the time of this appearance, he made a point to thank Ronald Reagan for all the publicity that had been generated by keeping him out of the country.

His best known plays include "Accidental Death of an Anarchist," "Orgasmo Adulto Escapes from the Zoo" and "The Pope and the Witch." He was awarded the Nobel Prize for Literature on 10/09/1997, 1:00 PM, Stockholm, Sweden, for "emulating the jesters of the Middle Ages in scourging authority and upholding the dignity of the downtrodden."