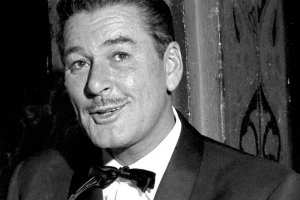 Australian-American actor. He was a top box-office draw for over 20 years playing romantic and adventurous roles such as "Captain Blood," 1935, "Adventures of Robin Hood," 1938 and "Dodge City," 1939. Flynn was handsome, 6'2" tall and dashing with a killer smile, the silver screen's perfect embodiment of testosterone magnetism and one of the greatest swashbucklers in motion picture history. In the late 1930's and early 1940's, he was among Hollywood's top money-making stars. His "Adventures of Don Juan" in 1949 failed at the box office and was his last picture with Warner Brothers.

Flynn came from Irish-American parentage and as a youth was a chronic runaway, adventurous and rebellious. At 15, he had been expelled from multiple schools and at 16 was on his own, leaving home for good and spending the next few years traveling in the South Seas. He worked on plantations and river boats, as a police cadet and tobacco farmer. He was 21 and living in New Guinea when a film crew arrived for a production and the camera picked up a few shots of Flynn doing such feats as diving into crocodile infested waters. He was on a gold-strike deep in New Guinea when there was a gunfight in which a native was killed. Flynn's plea of self-defense was accepted. After the trial, he moved on to Australia in the early '30s, where he was so down and out that he was bumming cash for a meal, when a producer who had seen him on camera offered him a job in Tahiti. He was cast in the semi-documentary, "In the Wake of the Bounty," and became bitten by the acting bug. This part led to a contract with Warner Brothers and he continued to spend the next 15 years playing action-adventure heroes in tales of the high seas, costume epics and war pictures.

For health reasons, he was not allowed to serve in WWII, tarnishing his courageous, heroic image. A notorious womanizer who loved young girls, in November 1942, he found himself charged with statutory rape. He was acquitted of the charge, however the damage had been done. The phrase, "in like Flynn" became a raucous joke, an expression he grew to despise even though he boasted that he had spent some 12,000 nights making love. Flynn's manly (and womanly) escapades began at a young age after being introduced to sex by the family maid at age 12. Years later he was charged with raping a little-known attractive young French girl. Again he was acquitted, but the publicity intensified his self-destruction. His legendary drinking increased and his dashing good looks began to fade as his face became heavy and puffy from his self-destructive lifestyle.

By 1948, he had made 34 films in a span of 12 years. In the 1950s he made a series of unsuccessful movies and he began to rapidly age as he fell into a world of high living, alcohol and narcotics, mainly morphine.

Flynn married three times and had four children. His autobiography, "My Wicked Wicked Ways" would eventually sum up his life. Aboard his sailing ship while cruising off the coast of Vancouver, Canada, he died of a heart attack on 10/14/1959 with his 17 year-old girlfriend, Beverly Aadland by his side.

Some 20 years after his death, Flynn was again in the news due to the Charles Higham biography which claimed that he aided the Nazi and Japanese causes during WW II. Further, Higham claimed that Flynn was bisexual. Flynn's daughters, Deirdre and Rory, angrily denied Higham's claims. Inasmuch as Higham tends to write unauthorized biographies about people who are dead and unable to defend themselves, usually calling his subjects bisexual and Nazis, his scandal-mongering books may be taken as semi-fiction.