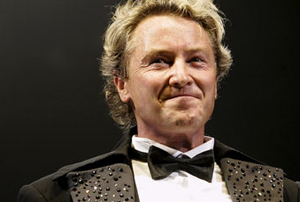 Michael Ryan Flatley (born July 16, 1958 in Detroit, Michigan) is an Irish-American step dancer from the south side of Chicago. His parents were from County Mayo and County Carlow. As a child, he moved to Chicago - the city which he considers his home town.

He began dancing lessons at 11 and, in 1975, became the first non-European to win the All-Ireland World Championship for Irish dance. As a trained boxer he won the Golden Gloves Championship in 1975. Flatley is also known as being a proficient flutist.

His first dance teachers were his mother and his grandmother Hannah Ryan, an Irish dancing champion. After high school graduation, he opened a dance school.

Career
His first professional break came when he joined The Chieftains for tours in the 1980s. He created the initial choreography for Riverdance and, with fellow lead dancer Jean Butler, led the show to great success as the intermission act in the Eurovision Song Contest on April 30, 1994. Flatley and Butler then starred in the full-length show that was developed from the original seven-minute act. After leaving the show due to creative disagreements, Flatley produced, directed, and choreographed his own show, Lord of the Dance. In 1998, Flatley put together a dance production called Feet of Flames, a version of which toured Europe and the US in 2000 and 2001.

Flatley's current Irish dance show is Celtic Tiger, which opened in July 2005. The show explores the history of the Irish people and Irish immigration to the US and fuses a wide range of dance styles, including jazz. The show also includes popular elements from his previous shows, such as Flatley's flute solos and the line of dancers in the finale. Flatley released his own autobiographical book titled Lord of the Dance: My Story in March 2006. Regarding his future plans, Flatley was quoted in the Celtic Tiger program book as saying, "I will be a dancer until the day I die."

Awards and recognition
Flatley received the National Endowment for the Arts' National Heritage Fellowship in 1988 and was named one of National Geographic Society's Living Treasures in 1991 for mastery of a traditional art form - the youngest person at that time ever to receive this accolade. In May of 1989, Flatley set a Guinness Book world record for tapping speed at 28 taps per second; when this record was broken, he set another record in February of 1998, by achieving 35 foot taps per second. The current record holder is James Devine, at 38 taps per second. In September 2000, Flatley was awarded the prestigious 'Coq Flambee' by the Sorbonne, Paris, for his commitment to the furtherance of Franco-Irish 'relations'. In December 2001, Flatley became the first recipient of the Irish Dancing Commission Fellowship award, an honorary degree in Irish dance, and was simultaneously made a Fellow of the American Irish Dance Teachers’ Association. Irish America Magazine named Flatley Irish American of the Year in March 2003. On the 3rd June 2007 The Freedom of the City of Cork was conferred on the entertainer at a ceremony in Cork's City Hall.

Personal life
In 1986 Flatley wed Polish make-up artist Beata Dziaba, but was divorced 11 years later. He battled bouts of depression and drinking after the break-up, and admitted, "When I wasn’t involved in a show I would sometimes be drunk for two weeks at a time." He then had a series of relationships and in 2002 became engaged to his long-term girl friend Lisa Murphey. In 2003 real estate agent Tyna Marie Robertson accused him of rape in a Las Vegas hotel and through her attorney demanded a large financial settlement in return for not going public. He said it was consensual sex and the case was dropped. He then sued her attorney for blackmail and extortion. At the 10th Anniversary of Lord of the Dance in June of 2006, Michael Flatley was accompanied by dancer Niamh O’Brien who dances with Flatley in Celtic Tiger. O'Brien, who is in her 30s, has danced with Flatley in Riverdance, Lord of the Dance, Feet of Flames, and now Celtic Tiger. The two shortly thereafter announced that they were dating, and married in "a low-key Catholic ceremony " in Fermoy Co.Cork on Saturday October 14th 2006. Michael and Niamh became parents to their first child, a son on Thursday 26th April 2007.

In April 2006, Flatley spoke about his recent discovery of a facial skin cancer. He kept the cancer scare a closely-guarded secret, but said, "I'm completely fine now, thank God."

On November 15, 2006, Flatley's website reported that he had been admitted to hospital suffering from a serious illness, which is believed not to be related to his cancer scare, or any kind of serious accident. All his up-and-coming shows for Celtic Tiger have been cancelled.

Flatley, who is worth £350 million, has homes in Barbados, Chicago, France, Ireland and London.