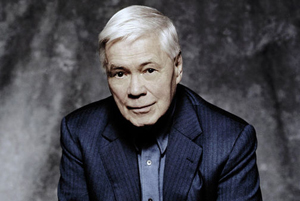 The German baritone Dietrich Fischer-Dieskau (born May 28, 1925) is regarded by many as the finest Lieder singer of his generation. He is greatly admired for his interpretations, the tonal qualities and shadings of color in his voice, his exceptional rhythmic sense and his impeccable diction. Fischer-Dieskau has also performed and recorded many operatic roles.

Early years
Albert Dietrich Fischer-Dieskau was born in Berlin to Albert, a principal, and Dora, a teacher. He started singing as a child and began formal voice lessons at the age of sixteen. When he was drafted into the Wehrmacht in 1943, Fischer-Dieskau had just completed his secondary school studies and one semester at the Berlin Conservatory. He was captured in Italy in 1945 and spent two years as an American prisoner of war. During that time, he sang Lieder in prisoner-of-war camps to the homesick German soldiers.

Singing career
In 1947, he returned to Germany where he launched his professional career as a singer in Badenweiler when he sang in Brahms' Ein Deutsches Requiem without any rehearsal—he was a last-minute substitute for a singer who was indisposed. He gave his first Lieder recital in Leipzig in the fall of 1947 and followed it soon afterwards with a highly successful first concert at Berlin's Titania-Palast.

In the fall of 1948, Fischer-Dieskau was engaged as principal lyric baritone at the Berlin State Opera, making his debut as Posa in Verdi's Don Carlos under Ferenc Fricsay. Subsequently, Fischer-Dieskau made guest appearances at the opera houses in Vienna and Munich. After 1949 he made concert tours in England, the Netherlands, Switzerland, France and Italy. In 1951, he made his Salzburg Festival concert debut with Mahler's Songs of a Wayfarer under Wilhelm Furtwängler. He made regular opera appearances at the Bayreuth Festival between 1954 and 1961 and at the Salzburg Festival from 1956 until the early 1970s.

As an opera singer, Fischer-Dieskau performed mainly at Berlin and at the Bavarian State Opera in Munich. He also made guest appearances at the Vienna State Opera, at the Royal Opera House, Covent Garden in London, at the Hamburg State Opera, in Japan, and at the King's Theatre in Edinburgh during the Edinburgh Festival. His first tour in the United States took place in 1955, when he was 29, with his concert début in Cincinnati on April 15th (Bach's Kreuzstab Cantata) and 16th (Brahms's Ein Deutsches Requiem). His American Lieder début, singing Schubert songs, took place in Saint Paul, Minnesota, on April 19th. His New York City début occurred on May 2nd at The Town Hall, where he sang Schubert's song cycle Winterreise without intermission. Both American recitals were accompanied by Gerald Moore.

In 1951, Fischer-Dieskau made his first recordings of Lieder with the pianist Gerald Moore, EMI Studios, London; they performed and recorded frequently until the latter's retirement in 1967 and were renowned above all for their performances of Franz Schubert. Their recordings of Die schöne Müllerin and Winterreise are highly prized.

Beyond his recordings of "Lieder" and German repertoire, Fischer-Dieskau also recorded interesting performances in the Italian operatic repertoire. His recordings as Rigoletto alongside Renata Scotto and Carlo Bergonzi and also Rodrigo in Verdi's Don Carlo are probably the most respected of these ventures. Both these recordings, made right at the peak of his career, are very fine indeed (excepting perhaps performances of the quality shown by Tito Gobbi or Giuseppe Taddei at their peak ). Other roles such as the title role in Verdi’s Macbeth (opera) alongside Elena Souliotis, Scarpia (from Tosca) with Birgit Nilsson and Giorgio Germont in La Traviata are not often as successful, showing insight and inventiveness but lacking somewhat in idiomatic Mediterranean vocal colour or temperament - perhaps seeming too Germanic. However, as with Elisabeth Schwarzkopf and Maria Callas, Fisher-Dieskau's performances always seem thought-out and are often true to the score - practically anything with his name on it is worthy of interest.

Fischer-Dieskau retired from the concert hall in 1992 and dedicated himself to conducting, teaching (especially Lieder), painting, writing books, etc.

He is an honorary member of The Robert Schumann Society.

Personal life
In 1949, Fischer-Dieskau married the cellist Irmgard Poppen. Together they had three sons: Mathias (stage designer), Martin (conductor), and Manuel (cellist). Irmgard died in 1963 of complications following childbirth. Afterwards, Fischer-Dieskau was married to the actress Ruth Leuwerik from 1965 to 1967 and Christina Pugel-Schule from 1968 to 1975. Since 1977 he has been married to the soprano Julia Varady.