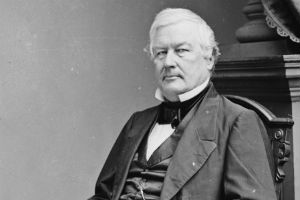 Millard Fillmore (January 7, 1800 – March 8, 1874) was the 13th President of the United States (1850–1853) and the last member of the Whig Party to hold the office of president. As Zachary Taylor\'s Vice President, he assumed the presidency after Taylor\'s death.

Fillmore opposed the proposal to keep slavery out of the territories annexed during the Mexican–American War in order to appease the South and so supported the Compromise of 1850, which he signed, including the Fugitive Slave Act (\"Bloodhound Law\") which was part of the compromise. On the foreign policy front, he furthered the rising trade with Japan and clashed with the French over Napoleon III\'s attempt to annex Hawaii and with the French and the British over the attempt of Narciso López to invade Cuba. After his presidency, he joined the Know-Nothing movement; throughout the Civil War, he opposed President Abraham Lincoln and during Reconstruction supported President Andrew Johnson. He is consistently included in the bottom 10 of historical rankings of Presidents of the United States.

Fillmore was born in a log cabin in Moravia, Cayuga County, in the Finger Lakes region of New York State, on January 7, 1800, to Nathaniel Fillmore and Phoebe Millard, as the second of nine children and the eldest son. He later lived in East Aurora, New York in the southtowns region, south of Buffalo.  Though Fillmore\'s ancestors were Scottish Presbyterians on his father\'s side and English dissenters on his mother\'s, he became a Unitarian in later life.  His father apprenticed him to cloth maker Benjamin Hungerford in Sparta, New York,[8] at age fourteen to learn the cloth-making trade. He left after four months, but subsequently took another apprenticeship in the same trade at New Hope, New York. He struggled to obtain an education living on the frontier and attended New Hope Academy for six months in 1819. Later that year, he began to clerk for Judge Walter Wood of Montville, New York, under whom Fillmore began to study law.

He fell in love with Abigail Powers, whom he met while at New Hope Academy and married on February 5, 1826. The couple had two children, Millard Powers Fillmore and Mary Abigail Fillmore. After leaving Wood and buying out his apprenticeship, Fillmore moved to Buffalo, where he continued his studies in the law office of Asa Rice and Joseph Clary. He was admitted to the bar in 1823 and began his law practice in East Aurora where, in 1825, he built a house for his new bride. In 1834, he formed a law partnership, Fillmore and Hall (becoming Fillmore, Hall and Haven in 1836), with close friend Nathan K. Hall (who would later serve in his cabinet as Postmaster General). It would become one of western New York\'s most prestigious firms, and exists to this day as Hodgson Russ LLP. In 1846, he founded the private University of Buffalo, which today is the public University at Buffalo, The State University of New York, the largest school in the New York state university system.

In 1828, Fillmore was elected to the New York State Assembly on the Anti-Masonic ticket, serving three one-year terms, from 1829 to 1831. In his final term he chaired a special legislative committee to enact a new bankruptcy law that eliminated debtors\' prison. As the measure had support among some Democrats, he maneuvered the law into place by taking a nonpartisan approach and allowing the Democrats to take credit for the bill. This kind of inconspicuousness and avoiding the limelight would later characterize Fillmore\'s approach to politics on the national stage.

In Congress, he opposed admitting Texas as a slave territory, he advocated internal improvements and a protective tariff, he supported John Quincy Adams by voting to receive anti-slavery petitions, he advocated the prohibition by Congress of the slave trade between the states, and he favored the exclusion of slavery from the District of Columbia. He came in second place in the bid for Speaker of the House of Representatives in 1841. He served as chair of the House Ways and Means Committee from 1841 to 1843 and was an author of the Tariff of 1842, as well as two other bills that President John Tyler vetoed.

After leaving Congress, Fillmore was the unsuccessful Whig candidate for Governor of New York in 1844. He was the first New York State Comptroller elected by general ballot, defeating Orville Hungerford 174,756 to 136,027 votes, and was in office from 1848 to 1849. As state comptroller, he revised New York\'s banking system, making it a model for the future National Banking System.

After Taylor died suddenly on July 9, 1850, Fillmore became president. The change in leadership also signaled an abrupt political shift. Fillmore had very different views on the slavery issue. Before Taylor\'s death, Fillmore told him that, as President of the Senate, he would give his tie-breaking vote to the Compromise of 1850. When Fillmore took office, the entire cabinet offered their resignations.  Fillmore accepted them all and appointed men who, except for Treasury Secretary Thomas Corwin, favored the Compromise of 1850. When the compromise finally came before both Houses of Congress, it was very watered down. As a result, Fillmore urged Congress to pass the original bill. This move only provoked an enormous battle where \"forces for and against slavery fought over every word of the bill.\" To Fillmore\'s disappointment the bitter battle over the bill crushed public support. Clay, exhausted, left Washington to recuperate, passing leadership to Senator Stephen A. Douglas of Illinois. At this critical juncture, President Fillmore announced his support of the Compromise of 1850.

On August 6, 1850, he sent a message to Congress recommending that Texas be paid to abandon its claims to part of New Mexico. This, combined with his mobilization of 750 Federal troops to New Mexico, helped shift a critical number of northern Whigs in Congress away from their insistence upon the Wilmot Proviso—the stipulation that all land gained by the Mexican War must be closed to slavery.

Admit California as a free state.

Settle the Texas boundary and compensate the state for lost lands.

Abolish the slave trade, but not slavery, in the District of Columbia.

Each measure obtained a majority, and, by September 20, President Fillmore had signed them into law. Webster wrote, \"I can now sleep of nights.\" Whigs on both sides refused to accept the finality of Fillmore\'s law (which led to more party division, and a loss of numerous elections), which forced Northern Whigs to say \"God Save us from Whig Vice Presidents.\" Fillmore\'s greatest difficulty with the fugitive slave law was enforcing it without showing favor to Southern Whigs. His solution was to appease both northern and southern Whigs. He called for enforcing the fugitive slave law in the North, and enforcing in the South a law forbidding involvement in Cuba (for the sole purpose of adding it as a slave state).

In foreign affairs, Fillmore was particularly active in the Asia-Pacific region, especially Japan. American shipping interests had become more keen on opening Japan up to outside trade because it would allow them to stop for supplies en route to China and Southeast Asia.  American shippers also looked to the British opening of China to trade as an example of the \"benefits of new trade markets.\"  Fillmore, with help from Secretary of State Daniel Webster, sent Commodore Matthew C. Perry to open Japan to Western trade.  Though Perry did not reach Japan until Franklin Pierce had replaced Fillmore as president,  Fillmore does earn the credit for ending Japanese isolation because it was he who ordered the trade mission. Fillmore was also a staunch defender against foreign intervention in Hawaii. France\'s Napoleon III attempted to annex the Hawaiian Islands, but was forced to withdraw after a strongly worded message from Fillmore suggesting that \"the United States would not stand for any such action.\"

Though President Taylor had signed the Clayton–Bulwer Treaty preventing Britain and the US from taking more possessions in the Americas, Great Britain and the United States were still attempting to gain ground in the region. The situation became tense enough that Fillmore ordered several warships to guard American merchants in an attempt to prevent British interference.  Fillmore was also caught in a situation involving Cuba. Many southerners were eager to expand the bounds of slavery and since slavery territories were locked down because of the Compromise of 1850, many southerners turned to the Caribbean. Venezuelan Narciso López gathered a small force of Americans to invade Cuba. Though Fillmore tried to block such efforts, he was nevertheless unsuccessful as López managed to sail out of New Orleans. Despite the failure of the invasion, López tried another invasion a year later which came to a quick end after Spanish troops routed them from the island. The incident became particularly embarrassing for Fillmore because southerners felt he should have supported the invasion, while Northern democrats were upset at his apology to the Spanish. The French and British dispatched warships to the region in response. Fillmore sent a stern warning saying that under certain conditions control of Cuba \"might be almost essential to our [America\'s] safety.\"

Another issue that presented itself during Fillmore\'s presidency was the arrival of Lajos Kossuth, the exiled leader of a failed Hungarian revolution. Kossuth wanted the United States to abandon its nonintervention policies when it came to European affairs and recognize Hungary\'s independence. The problem came with the enormous support Kossuth received from German-American immigrants to the United States (who were essential in the reelection of both Whigs and Democrats). Fillmore refused to change American policy, and decided to remain neutral despite the political implications that neutrality would produce.