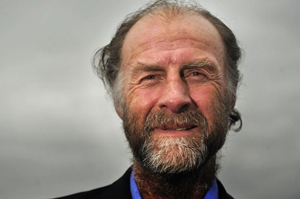 Sir Ranulph Twisleton-Wykeham-Fiennes, 3rd Baronet OBE (born 7 March 1944), usually known simply as Ranulph (Ran) Fiennes, is an English adventurer and holder of several endurance records. He was the first man to visit both the north and south poles by land and the first man to completely cross the Antarctic by foot.

Fiennes was born in England shortly after the death of his father, Lieutenant-Colonel Sir Ranulph Twisleton-Wykeham-Fiennes, who was killed in action in the Second World War at Monte Cassino in 1943. Fiennes inherited his father's baronetcy, becoming the 3rd Baronet at his birth. Fiennes is the third cousin of Hollywood film actors Joseph and Ralph Fiennes, and is a distant cousin of Britain's royal family.

After the war his mother moved the family to South Africa where he remained until he was 12. Ranulph then returned to be educated at Eton, after which he joined the British Army.

Soldier
Fiennes served eight years in the British army — in his father's regiment, the Royal Scots Greys — and was later seconded to the Special Air Service, where he specialised in demolitions. He admitted in his autobiography to cheating on the notoriously harsh SAS endurance test known as the Long Drag.

Service life was enlivened by various scrapes and escapades, including an occasion when Fiennes and a brother officer procured a very lively, squirming piglet, smothered it with tank grease and slipped it into the crowded ballroom of the army's Staff College, Camberley. On another occasion, offended by the construction of an ugly concrete dam built by a US film company for the production of the film Doctor Dolittle in the Wiltshire village of Castle Combe — reputedly the prettiest village in England — Fiennes planned to demolish the dam. He used explosives which he later claimed to have obtained legitimately from the armoury, but in the event didn't detonate them. Using skills from a recently completed training course on evading search dogs by night, he escaped capture, but he and a guilty colleague were both subsequently traced. After a court case, Fiennes had to pay a hefty fine but he and his co-conspirator were discharged from the SAS. Fiennes was initially posted to another cavalry regiment but was then allowed to return to his regiment.

Becoming disillusioned by his British Army service, in particular his career prospects, he spent the last two years of his service seconded to the army of the Sultan of Oman. At the time, Oman experienced a growing communist insurgency supported from neighbouring South Yemen. Fiennes had a crisis of conscience soon after arriving in Oman, as he became aware of the Sultan's poor government. However he decided that the oppression threatened by a communist takeover, combined with moves towards progressive change within the Sultanate system, justified his part in the conflict. After familiarisation, he commanded the Reconnaissance Platoon of the Muscat Regiment, seeing extensive active service in the Dhofar Rebellion. He led several raids deep into rebel-held territory on the Djebel Dhofar and was decorated for bravery by the Sultanate.

James Bond
Despite having almost no acting experience, Ranulph Fiennes was on the shortlist to replace Sean Connery in the role of James Bond. Fiennes was summarily rejected on meeting Bond producer Cubby Broccoli, who said his hands were too big and he had "a face like a farmer".

Adventurer
Since the 1960s Fiennes has been an adventurer. He led expeditions up the White Nile on a hovercraft in 1969 and on Norway's Jostedalsbreen Glacier in 1970. Perhaps his most famous trek was the Transglobe Expedition he undertook from 1979 until 1982. Fiennes, Oliver Shepard and Charles Burton journeyed around the world on its polar axis using surface transport only, covering 52,000 miles and becoming the first people to have visited both poles by land.

In 1992 Fiennes led an expedition that discovered the lost city of Ubar in Oman. The following year he joined nutrition specialist Mike Stroud in an attempt to become the first to cross Antarctica unaided. Having crossed the continent in 90 days, they were forced to call for a pick-up on the Ross Ice Shelf, frostbitten and starving, on day 95.

In 2000, he attempted to walk solo and unsupported to the North Pole. The expedition failed when his sleds fell through weak ice and Fiennes was forced to pull them out by hand. He sustained severe frostbite to the tips of all the fingers on his left hand, forcing him to abandon the attempt. On returning home, his surgeon insisted the necrotic fingertips be retained for several months (to allow regrowth of the remaining healthy tissue) before amputation. Impatient at the pain the dying fingertips caused, Fiennes removed them himself (in his garden shed) with a fretsaw.

Despite suffering from a heart attack and undergoing a double heart bypass operation just four months before, Fiennes joined Stroud again in 2003 to carry out the extraordinary feat of completing seven marathons in seven days on seven continents in the Land Rover 7x7x7 Challenge for the British Heart Foundation. Their route:

Speaking after the event, Fiennes said the Singapore marathon had been by far the most difficult because of high humidity and pollution. He also said his cardiac surgeon had approved the marathons, providing his heart-rate did not exceed a 130 beats per minute; Fiennes later confessed to having forgotten to pack his heart-rate monitor, and as such does not know how fast his heart was beating.

In March 2007, despite a morbid, lifelong fear of heights, Fiennes undertook a personal challenge to climb the Eiger by its much-feared North Face, with sponsorship totalling £1.5 million to be paid to the Marie Curie Cancer Care Delivering Choice Programme.

Author
Fiennes's career as an author has developed alongside that of an explorer. He is the author of 13 books in fiction and non-fiction. In 2003 he published a biography of Captain Robert Scott which proved a robust defence of Scott's achievements and reputation which had been strongly questioned by biographers such as Roland Huntford. Although others have made comparisons between Fiennes and Scott, Fiennes says he identifies more with Captain Oates, another member of Scott's doomed Antarctic team.

Politician
Fiennes stood for the Countryside Party in the 2004 European elections in the South West England region — fourth on their list of six. The party received only 30,824 votes — insufficient for any of their candidates to be elected.

He is also a member of the libertarian pressure group The Freedom Association.

Fiennes was appointed OBE in 1993 "for human endeavour and for charitable services" — his expeditions have raised £5 million for good causes. In 1995 he was awarded the Polar Medal with bar, having visited both poles.

In a 2007 Top Gear special, the presenters travelled to the Magnetic North Pole in a Toyota Hilux. Sir Ranulph was called in to speak with the presenters after their constant joking and horseplay during their cold weather training. As a former guest on the show who was familiar with their penchant for tomfoolery, Fiennes bluntly informed them of the grave dangers of polar expeditions, showing pictures of his own frostbite injuries and presenting what remained of his left hand. Sir Ranulph was given recognition by having his name placed before every surname in the closing credits: "Sir Ranulph Clarkson, Sir Ranulph Hammond, Sir Ranulph May"....

Personal life
Fiennes married his childhood sweetheart Virginia Pepper ("Ginny") on September 9, 1970. The couple moved to a country farm estate in Exford, on Exmoor, Devon where while he raised cattle and sheep, Ginny built up her herd of rare-breed Angus cattle while Sir Ranulph was on his expeditions. She supported him so greatly, that she was the first woman to receive the Polar Medal. The two remained married until her death from stomach cancer in February 2004.

He embarked on a lecture tour, where in Cheshire he met divorcee horsewoman Louise Millington (born Bath, Somerset circa 1967), whom he married in a ceremony at St Boniface's Church, Bunbury one year and three weeks after Ginny's death. The couple welcomed a daughter Elizabeth in April 2006.