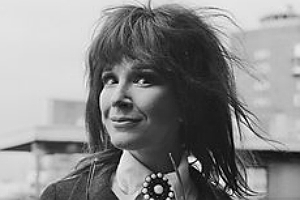 Fenella Fielding (born 17 November 1927) — "England's first lady of the double entendre" — is an English actress, popular in the 1950s and 1960s. She is known for her seductive image and distinctively husky voice.

She was born in 1927 as Fenella M. Feldman in London, of Romanian/Russian Jewish descent, the daughter of Tilly (née Katz; 1902–1977) and Philip Feldman. She is the younger sister of Lord Feldman of Frognal. She grew up in Lower Clapton and later Edgware where she attended North London Collegiate School. Her father at one time owned a cinema in Silvertown, east London. She was not related to the late actor Marty Feldman, as has been misreported. Fenella Fielding has never married.

Fielding began her acting career in 1954, concentrating on stage theatrical productions. She was given her first break by the actor Ron Moody, who had met her in an amateur production at the London School of Economics. Her performance in Sandy Wilson's musical version of Valmouth made her a star in the late 1950s. By 1959 she was appearing with Kenneth Williams in the comedy revue Pieces of Eight, written by Harold Pinter and Peter Cook.

She had occasional guest appearances in television programmes such as The Avengers (after being passed over as Patrick Macnee's regular partner in favour of Honor Blackman) and in Danger Man. She appeared in two of the Carry On films and three of the Doctor films (e.g. Doctor in Clover). She interspersed these with performances in plays by Ibsen, Shakespeare and Henry James, reputedly keeping an edition of Plato's writings by her bed.

Fielding was the uncredited Village announcer in The Prisoner (1967–68), and co-starred with Tom Poston and Robert Morley in the remake of The Old Dark House (1963). In Dougal and the Blue Cat, based on The Magic Roundabout, she voiced the character of the Blue Voice — referred to as "Madam" by both Buxton (the blue cat of the title) and Dougal at various stages throughout the film. In the late 1960s, she was approached by Federico Fellini to work on one of his films, but turned it down because she was already booked to perform on stage at the Chichester Festival Theatre.

She was a guest on The Morecambe and Wise Show on four occasions between 1969 and 1972. In the theatre, she was in, among other things, Alan Ayckbourn's Absurd Person Singular at the Criterion Theatre, London, directed by Sam Walters, in 1974, and Fallen Angels at Watford, directed by Kim Grant.

Fielding appeared from 14 to 19 February 2011 at the Jermyn Street Theatre, London in an English Chamber Theatre presentation of Jane McCulloch's Dearest Nancy, Darling Evelyn, the dramatised letters of Nancy Mitford and Evelyn Waugh. Fielding worked with writer-performer Graham Roos performing the role of Sandalphon in Roos' verse cabaret Apocalypse Calypso at King's Place. and later provided a substantial cameo in his film about Byron - Darkness.

She is a patron of the theatre charity The Music Hall Guild of Great Britain and America. In 2011 she also appeared in the third series of the CBBC children's sitcom The Legend of Dick and Dom, in an episode called "Land of the Luvvies", where she played Lotte Lawoo, the head of the Luvvies.

Fielding wrote the foreword to Carry On Actors (The Complete Who's Who of the Carry On Film Series) by Andrew Ross in 2011.

She voiced 'MOOD', the quirky supercomputer in the video game Martian Gothic in a script written by science fiction author Stephen Marley. Since 2000 she has been recording with Savoy, a book publishing and recording company. Her work with them includes readings of Colette, J.G. Ballard's Crash and T. S. Eliot's Four Quartets. She made an album of cover songs including Robbie Williams's Angels, Kylie Minogue's Can't Get You Out Of My Head, New Order's Blue Monday and the White Stripes' Passive Manipulation. In 2006, she toured Ireland in The Vagina Monologues. She has also provided the voice to two tracks on the Graham Roos album Quest.

A 2007 article in The Independent remarked that it was "one of the mysteries of British life that Fenella Fielding, whose wit and distinctive stage presence captivated figures such as Kenneth Tynan, Noël Coward and Federico Fellini, should have drifted into obscurity rather than being celebrated", and the same article quotes The Times as saying that Fielding's performance as Hedda Gabler was "one of the experiences of a lifetime".