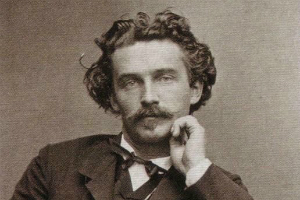 Anselm Feuerbach (12 September 1829 – 4 January 1880) was a German painter. He was the leading classicist painter of the German 19th-century school.

Feuerbach was born at Speyer, the son of the well-known archaeologist Joseph Anselm Feuerbach and the grandson of the legal scholar Paul Johann Anselm Ritter von Feuerbach. The house of his birth today is a little museum.

After having passed through the art schools of Düsseldorf and Munich, he went to Antwerp and subsequently to Paris, where he benefited by the teaching of Couture, and produced his first masterpiece, Hafiz at the Fountain in 1852. He subsequently worked at Karlsruhe, and then Venice. In Venice, he fell under the spell of the greatest school of colourists, and several of his work demonstrate a close study of the Italian masters. He then proceeded to Rome and then Vienna.

In Vienna, he associated with Johannes Brahms. In 1873, he became professor in the Vienna Academy, but disappointed with the reception given in Vienna to his design of The Fall of the Titans for the ceiling of the new Artists' House Museum, he went to live in Venice, where he died in 1880. After his death, Brahms composed Nänie, a piece for chorus and orchestra, in his memory.

He is associated with the Düsseldorf school of painting.

According to the 1911 Encyclopædia Britannica:

He was steeped in classic knowledge, and his figure compositions have the statuesque dignity and simplicity of Greek art. He was the first to realize the danger arising from contempt of technique, that mastery of craftsmanship was needed to express even the loftiest ideas, and that an ill-drawn coloured cartoon can never be the supreme achievement in art.