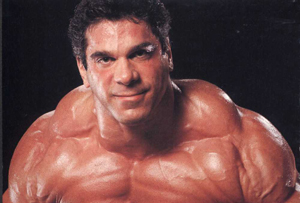 Louis Jude Ferrigno (born November 9, 1951) is an American bodybuilder and actor. Ferrigno has appeared in such television shows and movies as The Incredible Hulk, Pumping Iron (with Arnold Schwarzenegger and Franco Columbu), Sinbad of the Seven Seas, and, in the title role, Hercules in 1983. He is more recently known for playing a minor role in the sitcom King of Queens.

Born in Brooklyn, New York, Ferrigno was raised in an Italian-American family, the son of Matthew, a New York City Police Department Lieutenant who, according to Lou, was also a weightlifter and was often very critical and negative towards him, and mother Victoria. At the age of three, Lou suffered an ear infection and permanently lost 80% of his hearing. He started weight training at age 13, citing body builder and Hercules star Steve Reeves as one of his role models.

After graduating from Brooklyn Technical High School in 1969, Ferrigno won his first major titles, IFBB Mr. America and Mr. Universe, four years later. In 1974, he came in third on his first attempt at the Mr. Olympia competition. He again came third the following year, and his attempt to beat Arnold Schwarzenegger was the subject of the 1977 documentary Pumping Iron. Following this, Ferrigno left the competition circuit for many years.

Ferrigno competed in the first World's Strongest Man contest in 1977, where he finished fourth in a field of eight competitors.

At his peak, the 6 ft 5 in (196 cm) Ferrigno's contest weight was 275 lb (125 kg) and he was the tallest professional bodybuilder at that time. While he never bested Schwarzenegger in bodybuilding, Ferrigno did have one triumph over his Austrian rival: the role of the Hulk on the 1970s television series.

In the early 1990s, Ferrigno returned to bodybuilding, competing for the 1992 and 1993 Mr. Olympia titles. Finishing 12th and 10th, respectively, he then turned to the Olympia Masters, coming second in 1994 to Robby Robinson. After this, he retired from competition.

Ferrigno sees his loss of hearing as influential towards bodybuilding and his life: "...if I hadn't lost some of my hearing, I wouldn't be where I am now. It forced me to maximize my own potential. I had to be better than the average person to succeed."

He married Susan Groff in 1978, divorcing a year later. On May 3, 1980, he married psychotherapist Carla Green, who then also began serving as his manager and later became a personal trainer. They have three children, Shanna, born 1981; Louis, Jr., born 1984; and Brent, born 1990. In the summer of 2005, his daughter was a star of the E! reality TV series, Filthy Rich: Cattle Drive.

Since 2000, Ferrigno has played himself during intermittent guest appearances on the CBS television show, The King of Queens, where he (along with his wife Carla) is the Heffernans' next-door neighbor. Because of his role as the title character on The Incredible Hulk, he is often the target of "Hulk jokes" by Doug and his friends.

Ferrigno has appeared in an ad for Longhorn Steakhouse, a Southeastern chain of steak houses.

On February 13, 2006 he was sworn in as a Los Angeles County reserve sheriff's deputy.

In June 2006, Lou attended the first Bionicon in Tampa, Florida.

Trivia
Ferrigno commonly went to see a physician who checked up on whether he was doing damage to his body.
Ferrigno was harassed frequently as a child and as a result his personal heroes were Spider-Man and the Hulk. Appropriately, he would later play the role as the Hulk himself in the Incredible Hulk television series and related TV movies. He was also a fan of the Hercules film that starred Steve Reeves. Ferrigno frequently points to Reeves as one of his primary role models and would later play Hercules just as Reeves had.
He made a cameo in the 2003 film Hulk as a security guard, including one deleted scene.
His son, Lou Ferrigno Jr., is a linebacker for the University of Southern California Trojans football team.
He once appeared in a segment for the short-lived parody series Banzai, in which he competed against a priest and a rabbi for "the soul of a newborn child" by means of a cycling contest.
He is mentioned in the song "Irresistable Force" by the now defunct rap-rock group 2 Skinnee J's"...contents under pressure, about to explode like Lou Ferrigno mean and green so check my signal..."
Ferrigno is mentioned in the song "FOB for Life" by the Notorious MSG "Ready to go, I got more muscle than Lou Ferrigno"