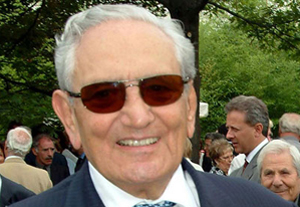 Michele Ferrero (born April 26, 1925) is the owner of the eponymous chocolate maker Ferrero SpA, one of Europe's largest with estimated 2002 sales of $4 billion.

This remarkable story began in 1946, in Italy, where, after the war, candy and confections were in short supply and were purchased mainly for special occasions from the local sweet shop. It was here in northwestern Italy in the small town of Alba, that master confectioner Pietro Ferrero developed a system that enabled him to mass-produce true quality confections and offer them to consumers at reasonable prices.

The first of the Ferrero products was Pasta Gianduja, a chocolate-hazelnut spread that, re-named Nutella®, was destined to become the #1 selling sweet spread in the world. Since that first successful venture, Ferrero has gone on to introduce many of the most celebrated confectionery brands in the world.

Although Pietro Ferrero and his brother Giovanni had laid the groundwork for future company success, when both died in the early 1950's, it fell to Pietro's son, Michele Ferrero, to continue the pursuit of their vision, as Ferrero expanded across Europe and then abroad.

Ferrero first moved beyond Italy in 1956, establishing both manufacturing facilities and offices in Germany. This was followed by new France in 1958.

More recently, offices have been opened in Hungary, Poland and in the Czech Republic.