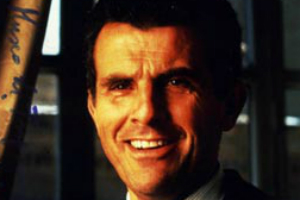 Salvatore Ferragamo (June 5, 1898 – August 7, 1960) was an Italian shoe designer. He worked with many Hollywood stars in the 1920s, before returning to Italy to found the eponymous company making unique handmade footwear. His scientific and creative approach to shoes spawned many innovations such as the wedge heel and cage heel. Film stars and celebrities continue to patronize his company, which has evolved into a luxury goods empire spanning the world.

Salvatore Ferragamo was born in 1898 in Bonito, near Avellino, the eleventh of 14 children. After making his first pair of shoes at age nine, for his sisters to wear at their confirmation, young Salvatore decided that he had found his calling. He always had a passion for shoes. After studying shoemaking in Naples for a year, Ferragamo opened a small store based in his parent's home. In 1914, he emigrated to Boston, where one of his brothers worked in a cowboy boot factory.

After a brief stint at the factory, Ferragamo convinced his brothers to move to California, first Santa Barbara then Hollywood. It was here that Ferragamo found success, initially opening a shop for repair and made-to-measure shoes, which soon became prized items among celebrities of the day, leading to a long period of designing footwear for the cinema. However, his thriving reputation as 'Shoemaker to the Stars' only partially satisfied him. He could not fathom why his shoes pleased the eye yet hurt the foot, so he proceeded to study anatomy at the University of Southern California.

After spending thirteen years in the United States, Ferragamo returned to Italy in 1927, this time settling in Florence. He began to fashion shoes for the wealthiest and most powerful women of the century, from the Maharani of Cooch Behar to Eva Peron to Marilyn Monroe. He opened a workshop in the Via Mannelli, concentrating his efforts in experimenting with design, applying for patents for ornamental and utility models and some related inventions. Although he filed for bankruptcy in 1933 due to bad management and economic pressures, Ferragamo nonetheless expanded his operation during the 1950 to a workforce of around 700 expert artisans that produced 350 pairs of handmade shoes a day.

Ferragamo was always recognized as a visionary, and his designs ranged from the strikingly bizarre objet d'art to the traditionally elegant, often serving as the main inspiration to other footwear designers of his time and beyond. Salvatore Ferragamo died in 1960 at the age of 62, but his name lives on as an international company, which has expanded its operations to include luxury shoes, bags, eyewear, silk accessories, watches, perfumes and a ready-to-wear clothing line. At his death his wife Wanda and later their six children (Fiamma, Giovanna, Fulvia, Ferruccio, Massimo and Leonardo) ran the Ferragamo company.

His most famous invention is arguably the "Cage Heel". Fiamma (Salvatore's eldest daughter who died in 1998) inherited her father's inimitable talent and came up with the "Vara pumps" in 1978.

The company is currently owned by the Ferragamo family, which in November 2006 included Salvatore's widow Wanda, five children, 23 grandchildren and other relatives. There is a rule that only 3 members of the family can work at the company, prompting fierce competition. To ease these tensions, in September 2006 the family announced a plan to float 48% of the company on the stock market, and since October 2006 Michele Norsa has served as managing and general director. However, as of January 2008, this plan may be on put on hold in the midst of the downturn in the financial market. If the listing on the stock market proceeds, the fund will be directed primarily towards building its positions in China. The company is holding its 80th birthday exhibition in Shanghai.

A museum dedicated to Ferragamo's life and work opened in the Palazzo Spini Feroni in 1995. The palazzo had been bought by Ferragamo in the 1930s.

Salvatore Ferragamo recently launches foundation for young talents. The institution, which will be based in the brand’s original birth place Florence, Italy, will offer a curriculum specifically developed upon the values imparted by the late fashion designer Salvatore Ferragamo, who founded the label in 1920s.

Wanda Ferragamo Miletti: has led the group since 1960, when her husband and founder of the company, Salvatore, died. She is currently Honorary Chairman.

Ferruccio Ferragamo: he is currently President of the Company. He had twin sons Salvatore and James (above) by his first wife Amanda Peat, sister of Michael Peat, a royal courtier.

Leonardo Ferragamo, since 2000, he has served as CEO of Palazzo Feroni Finanziaria S.p.A, the family’s holding company.

Massimo Ferragamo: he is Chairman of Ferragamo USA, the Ferragamo company that has handled the brand’s distribution in North America since Fifties.

Fulvia Visconti Ferragamo: has run the fashion label’s silk accessories division since the Seventies. She is Vice-President of Salvatore Ferragamo SpA.

Fiamma Ferragamo di San Giuliano: she died in 1998, many still believe her to be an influential figure in the life of the company today. Her passion for her work, her imagination and inventiveness have led to the creation of some of the brand’s most iconic products, such as Vara shoe and the Gancino.