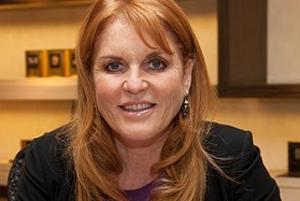 Sarah attended a senior boarding school that specialized in ballet. After graduating from Queen's Secretarial College at the age of eighteen, Sarah went to work in a public relations firm in London. Later she worked for an art gallery, and then a publishing company. She says that she lived simply in a 30 pound-a-week room and wondered how to pay her bills. But she did have a jet-setting social life, and took frequent ski trips to Switzerland. Her boyfriends included a famous race car driver, Paddy McNally

Sarah comes from aristocracy with royal Stuart ancestry. On her father's side, Sarah is a descendant of King Charles II of England from two of his illegitimate sons Charles Lennox, 1st Duke of Richmond and James Crofts "Scott". She is a great-great-granddaughter of William Montagu-Douglas-Scott, 6th Duke of Buccleuch and a great-granddaughter of Mervyn Wingfield, 8th Viscount Powerscourt. She is also a distant cousin of Princess Alice, Duchess of Gloucester, an aunt of Queen Elizabeth II.

Sarah and Prince Andrew's romance began after some scheming to bring them together was orchestrated by Diana, Princess of Wales in 1985. Early in 1986 the couple were engaged and subsequently married in Westminster Abbey on 23 July 1986. Prince Andrew had the title of The Duke of York bestowed upon him by the Queen. Sarah automatically became Her Royal Highness The Duchess of York. In 1987, the Duchess became the first lady in the Royal Family to receive her Private Pilot's License.

The Duke and Duchess of York had two children during their marriage:

By 1992, the marriage was experiencing trouble and the couple had drifted apart. While her husband was away on military or royal duties, Sarah was frequently seen in the company of other men, most notably Texas millionaire Steve Wyatt. Prince Andrew and Sarah Ferguson finally agreed to separate in January 1992. Matters came to a head in August 1992, when surreptitiously taken photographs of John Bryan, an American financial manager - in the act of sucking on the toes of a topless Sarah - were published in the British tabloid newspaper The Daily Mirror. The Duchess was exposed to widespread public ridicule, which contributed to her further estrangement from the British Royal Family . After some 4 years of being officially separated, the Duke and Duchess made the mutual decision to divorce in 1996. The Duke and Duchess of York remain close friends and share in the upbringing of their two daughters.

After her divorce the press criticism was constant, focusing not only on her weight (some publications dubbed her the "Duchess of Pork") but also on her lifestyle and perceived extravagance. Having forgone a large divorce settlement in the hope of maintaining civil with the royal family, the Duchess set out in 1996 to establish a commercial and media career in the United States. She felt strongly that she should not work commercially in Britain and opted to commute regularly between her home outside London and paid commitments in the US.

Having lost weight and discovered new confidence, Sarah felt able to pass on her experience to others as the U.S. spokesperson for Weight Watchers International. The Duchess emerged as a role model and an international advocate for healthy weight management and efforts to address child obesity.

Sarah’s other commercial interests have included Wedgwood china, home fragrances for US retailer Bath and Body Works, and a signature line of Moissanite jewelry for K&G . Sarah is also a sought after public speaker represented by the prestigious Washington Speakers Bureau. Over the course of several years these activities, as well as the success of her many books, allowed Sarah to overcome the multi-million pound debts she amassed in the 80’s and 90’s.

In 2001, she nearly became a casualty of 9/11. By rights, she would have been in the Twin Towers at the time of the incident, but was behind schedule and on her way there in a taxi.

Until 2004 the Duke and Duchess shared the family’s home, Sunninghill Park, located outside London. That same year the Duke moved to the refurbished Royal Lodge, the former home of the Queen Mother who resided there until her death in 2002. Sunninghill Park was sold in 2007 and the Duchess moved to New York City where her lifestyle and media company Hartmoor, LLC is based. When residing in the UK, however, the Duchess lives in a separate suite of rooms in Royal Lodge.

"I love the fact that embrace me. I said I was sorry for whatever I had done in the UK, and they embraced me and said, OK, we'll give you a second chance. And they have given me my life back, the American people." Sarah now attracts fewer intrusive and unflattering media reports back in the UK.

* 1993, the Duchess founded Children in Crisis based in London with the support of two current trustees: Grahame Harding and Paul Szkiler. Over the years, Children in Crisis has grown to help over 250,000 children annually in 10 countries around the world.
* March 2003, she joined the American Cancer Society at a congressional briefing. The Duchess was a founding supporter of The American Cancer Society’s Great American Weigh In, an annual campaign (modeled after the Society’s Great American Smoke Out) aimed at raising awareness of the link between excess weight and cancer.
* 2005, the Duchess was named a global ambassador for Ronald McDonald House Charities’ World Children’s Day.
* 2006, the Duchess established The Sarah Ferguson Foundation based in New York, which derives funds from the Duchess’s commercial work and private donations with the aim of supporting charities internationally that serve children and families in dire need. She visited China, Japan, Poland, Mexico, and cities across the United States.
* 2007, the Duchess is continuing her multi-continent fundraising and media tour in the US.
* In Britain, the Duchess is a long-standing patron to a number of British charities, including the Teenage Cancer Trust, Tommy’s, and the Motor Neurone Disease Association.
* She is also the official spokesperson of SOS Children's Villages - USA.