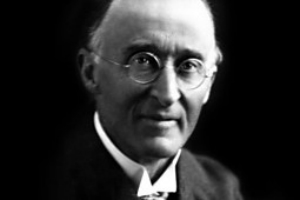 Eric William Fenby OBE (22 April 1906 – 18 February 1997) was an English composer and teacher who is best known for being Frederick Delius's amanuensis from 1928 to 1934. He helped Delius realise a number of works that would not otherwise have been forthcoming.

Fenby was born in Scarborough, North Yorkshire, and as a youth took lessons in the piano, organ and cello. At the age of 12 he was appointed organist at Holy Trinity Church. As a composer he was largely self taught. By 1925 he had conducted a work for string orchestra at the Spa Grand Hall in Scarborough and had written some minor pieces.

In 1928, hearing that Delius had become virtually helpless because of blindness and paralysis (due to syphilis), he offered to serve him as an amanuensis. Fenby worked, at the composer's home in Grez-sur-Loing, near Paris, for extended periods until Delius died almost six years later. The project was taxing not only because of the need to devise a unique mode of musical communication but also because of Delius's difficult temperament and atheism. Although born into a Methodist household, Fenby had recently become a devout Catholic. The strain on him was intensified by the requirement to act as nurse during the composer's final days. Then followed further responsibilities including visiting Delius's severely ill widow Jelka and accompanying the composer's exhumed body back to England for burial. The whole experience left him "completely burnt out". In 1936, he published an account, Delius As I Knew Him.

The works he helped Delius write (all for orchestra unless otherwise shown) are:

A Song of Summer

This episode in Fenby's and Delius's lives was portrayed in the BBC's 1968 production Ken Russell's Song of Summer which can be found on YouTube.

After Delius's death, Fenby entered the employ of the music publisher Boosey & Hawkes. He was contracted to write the score for Alfred Hitchcock's Jamaica Inn (from Daphne du Maurier's novel), but his film career was interrupted by World War II; after joining the Royal Artillery, he was transferred to the education corps at Bulford, where he conducted the Southern Command Orchestra, and was later commissioned to run Royal Army Education Corps courses in Lancashire. Having left the Catholic Church, he married Rowena C. T. Marshall (daughter of a Scarborough vicar) in 1944. They had a son Roger and a daughter Ruth.

After the war Fenby founded the music department of the North Riding Training College. He was artistic director for the 1962 Bradford Delius Festival. He then became professor of harmony at the Royal Academy of Music in London from 1964 until 1977.

He died in Scarborough having returned to Catholicism in his final years.

Fenby was appointed an Officer of Order of the British Empire (OBE) in 1962 for his artistic direction of the 1962 Delius Centenary Festival in Bradford. He was appointed President of the Delius Society that same year.

He was awarded honorary doctorates from the universities of Jacksonville, Bradford and Warwick.

As a conductor and pianist, he made numerous recordings, including the definitive performances found in the Fenby Legacy double LP for Unicorn Records, and was advisor to Ken Russell for the 1968 film Song of Summer (in which he was portrayed by Christopher Gable). He recorded the three Delius violin sonatas, firstly with Ralph Holmes and later with Yehudi Menuhin, and the Delius Cello Sonata with Julian Lloyd Webber. He was also the subject of a documentary film by Yorkshire Television called Song of Farewell.