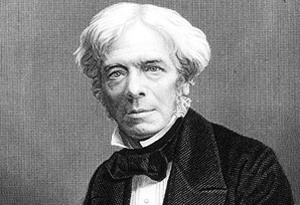 Michael Faraday, FRS (September 22, 1791 – August 25, 1867) was an English chemist and physicist (or natural philosopher, in the terminology of that time) who contributed significantly to the fields of electromagnetism and electrochemistry.

His inventions of electromagnetic rotary devices formed the foundation of electric motor technology.

As a chemist, Faraday discovered chemical substances such as benzene, invented an early form of the bunsen burner and the system of oxidation numbers, and popularized terminology such as anode, cathode, electrode, and ion.

Although he received little formal education and thus higher mathematics like calculus was always out of his reach, he went on to become one of the most influential scientists in history. Some historians of science refer to him as the best experimentalist in the history of science. It was largely due to his efforts that electricity became viable for use in technology. The SI unit of capacitance, the farad, is named after him, as is the Faraday constant, the charge on a mole of electrons (about 96,485 coulombs). Faraday's law of induction states that a magnetic field changing in time creates a proportional electromotive force.

He was Fullerian Professor of Chemistry at the Royal Institution of Great Britain, the first, and most famous, holder of this position to which he was appointed for life.

Faraday gave a successful series of lectures on the chemistry and physics of flames at the Royal Institution, entitled The Chemical History of a Candle. This was the origin of the Christmas lectures for young people, which are still given there every year and bear his name.

Faraday and William Whewell were responsible for coining many familiar words including 'electrode', 'cathode', and 'ion'.

Faraday refused to participate in the production of chemical weapons for the Crimean War citing ethical reasons.

A statue of Faraday stands in Savoy Place, London, outside the Institution of Electrical Engineers.

A recently built hall of accommodation at Brunel University is named after Faraday.

A hall at Loughborough University was named after Faraday in 1960. Near the entrance to its dining hall is a bronze casting, which depicts the symbol of an electrical transformer, and inside there hangs a portrait, both in Faraday's honour.

In the video game Chromehounds there is a ThermoVision Device named the Faraday.

The former UK Faraday Atmospheric Research Station in Antarctica was named after him.

Michael Faraday"Nothing is too wonderful to be true if it be consistent with the laws of nature."
"Work. Finish. Publish." — his well-known advice to the young William Crookes
"The important thing is to know how to take all things quietly."
Regarding the hereafter, "Speculations? I have none. I am resting on certainties. I know whom I have believed and am persuaded that he is able to keep that which I have committed unto him against that day."
"Next Sabbath day (the 22nd) I shall complete my 70th year. I can hardly think of myself so old."
Above the doorways of the Pfahler Hall of Science at Ursinus College in Collegeville, Pennsylvania, there is a stone inscription of a quote attributed to Michael Faraday which reads "but still try, for who knows what is possible..."