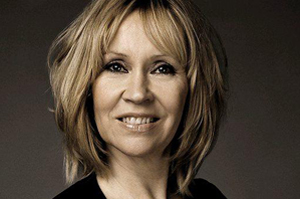 Agnetha Åse Fältskog is a Swedish pop singer. She was a member of the Swedish pop group ABBA.

Her name was originally spelled Agneta; she added the h later herself.

Her next album Eyes of a Woman, produced by Eric Stewart of 10cc fame, was released In 1985. "She is quite content to grace the works of various other lesser mortals with her immaculate, sugar-sweet voice", wrote Barry McIlheney in Melody Maker. The album sold well in parts of Europe but failed to match the success of Fältskog's previous effort.

In the summer of 1987, she travelled to Malibu, California, USA, where she recorded the album I Stand Alone produced by Peter Cetera and Bruce Gaitsch and released in November of 1987. It was a minor hit in Europe, except for Sweden where it spent eight weeks on the top of the charts and became one of the most popular records of the year. The single from the album "I Wasn't The One (Who Said Good-Bye)", on which Fältskog duetted with Peter Cetera, was released primarily in North America and became her second single to chart on the Billboard Hot 100 and also became a Top 20 Billboard Adult Contemporary hit. It has sold more than 500,000 copies worldwide.

After the release of I Stand Alone - in mid 1988 -, Fältskog took a break from her musical career and completely withdrew from the public life. In 1996, her autobiography "As I Am" was published in Swedish (1997 in English) followed by several compilation CDs of her Swedish and English recordings.

In April 2004, after years of silence, Fältskog's new single, "If I Thought You'd Ever Change Your Mind" (a cover of the song originally recorded by Cilla Black), was released. It reached No. 11 on the UK Singles Chart and became a sizeable hit in the rest of Europe. "It is exciting to hear her voice, utterly undimmed, delivering a tellingly-titled song", commented London's Music Week. A few weeks later, the album My Colouring Book, a collection of Fältskog's covers of the oldies, saw the light of the day. It topped the charts in Sweden, peaking at No.6 in Germany and No.12 in the UK, and reached mostly Top 10 and Top 20 chart positions in the rest of Europe (outside Scandinavia also in the Netherland, Poland and Switzerland) and No.50 in Australia. "I love this record", enthused Pete Clark in London's Evening Standard, while Daily Mail pointed out that "it reveals a genuine affection for the era's forgotten pop tunes". The Times reviewer noted that "her voice is still an impressive pop instrument", and The Observer shared the same sentiment suggesting that "time hasn't diminished her perfect voice". Reviewing the release in The Guardian, Caroline Sullivan wrote: "Agnetha Faltskog has a vulnerability that gets under the skin of a song. She may be cheating a trifle by including no original material on this collection of 1960s covers, but if anyone can do justice to the likes of Sealed with a Kiss, it's her. The soaring sentimentality evokes Cilla Black and Sandie Shaw in their mini-skirted pomp, and I don't say that lightly". The release attracted major media attention across Europe, but Fältskog staunchly refused to be involved in any extensive promotion of the album, including personal appearances, and limited her public exposure to the several short newspaper interviews, a few videos and a Swedish-language low-key TV special. Yet, the album managed to sell more than 500,000 copies worldwide, including 50,000 in the UK.

In 2004, she was nominated for Best Nordic Artist at the Nordic Music Awards (but did not win), and during Christmas of that year, for the first time in almost 20 years she gave an extensive interview which was filmed by the Swedish TV. In December 2004, Sony Music released a lavishly produced 6 CD boxed set comprising Fältskog's Swedish solo career before ABBA (5 original solo albums - 1968, 1969, 1970, 1971, 1975 - and additional compilation disc with bonuses).

The Daily Mirror in December 2006 revealed that Agnetha was recording a new album, for release in 2007 with all new songs. However, not much more is known about this and it can be only a rumour.

In January 2007, Agnetha appeared at the final performance of Mamma Mia! in Stockholm (as she had at its opening in 2005). Together with ex-husband and former colleague Bj?rn, she appeared on stage at the after show party held at Stockholm's Grand Hotel. She also sang a duet, "True Love", with Tommy K?rberg of Chess fame.