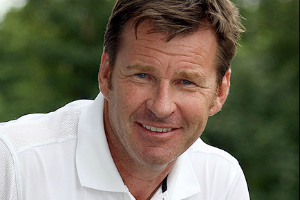 Faldo is the only child of George, an accountant at a chemical company and Joyce, a housewife. His mom, determined to expose him to cultural interests, took him to museums and the opera but the boy was crazy about and excelled in sports like soccer, swimming, and track. At 14, Nick fell in love with golf after watching Jack Nicklaus on TV. Soon he was playing the game obsessively. Known as a perfectionist, his life seemed to be consumed by golf.

He turned pro in 1976 at the age of 19 and as of 1994 has earned roughly $6 million. Concentrated and humorless on the course, Faldo, known as "Iceman," is one of the few PGA players with a woman caddy.

Faldo married journalist Melanie Rockall in 1979. The marriage dissolved in divorce in 1984 when Rockall discovered that Faldo had checked into a hotel with another woman.

The other woman was his then-manager's secretary, Gill Bennet, whom he married in 1986. He caused a scandalous sensation in the British tabloids in the fall of '95 when he left his wife, Gill, in their ninth year of marriage after being seen for the prior ten months with a college girl from Albuquerque, NM, Brenna Cepelak. On 11/01/95 Faldo moved out of the family's mansion leaving Gill and their kids Natalie, nine, Matthew, six, and Georgia, two.

After his two divorces and three kids, by 1996 he was having squabbles about the millions he's made on the links. His present girlfriend, 21-year-old Brenna Cepelak, accompanies him on tours.