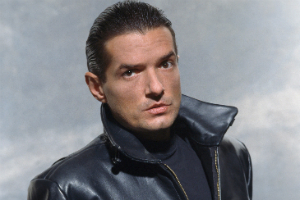 Falco's first hit was "Der Kommissar" ("The Commissioner") from the 1982 album Einzelhaft. A German language song about drug consumption that combines rap verses with a sung chorus, Falco's record was a number-one success in many countries but failed to break big in the US.

After a second album, Junge Römer (Young Romans) failed to provide a repeat to his debut single's success (outside of Austria and Germany, where the album topped the charts), Falco began to experiment with English lyrics in an effort to broaden his appeal, and chose a new production team. The result would be the most popular album and single of his career. Falco recorded "Rock Me Amadeus" inspired in part by the Oscar-winning film Amadeus, and the song became a worldwide hit in 1986. This time, his record reached No. 1 in the US and UK, bringing him the success that had eluded him in that major market a few years earlier.

"Jeanny", the third release from the album Falco 3, brought the performer back to the top of the charts across Europe. Highly controversial when it was released in Germany and the Netherlands, the story of "Jeanny" was told from the point of view of a possible rapist and murderer. Several DJs and radio stations refused to play the ballad, which was ignored in the US, though it became a huge hit in many European countries, and inspired a sequel on his next album.

In 1986, the album Emotional was released, produced by Rob and Ferdi Bolland (Bolland & Bolland). Songs on the album included "Coming Home (Jeanny Part 2)," "The Kiss of Kathleen Turner", and "Kamikaze Capa" which was written as a tribute to the late photojournalist Robert Capa. "The Sound of Musik" was another international success, and a Top 20 US dance hit, though it failed to make the US pop charts. .

In 1990, he wrote a song about Cindy Crawford and Tatjana Patitz, "Tanja P. not Cindy C.", which appeared on the album Data de Groove.

After 1986 there were a number of European hits, but Falco was rarely heard in the US and the UK. His 1992 comeback attempt, the album Nachtflug (Night Flight) including the song "Titanic", was successful in the German speaking territories but failed to chart internationally.

Falco died of severe injuries received on 6 February 1998, when his Mitsubishi Pajero collided with a bus on the road linking the towns of Villa Montellano and Puerto Plata in the Dominican Republic. It was later determined that the bus driver was speeding, for which the driver served three years in prison.