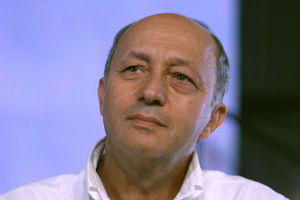 Laurent Fabius (born 20 August 1946) is a French Socialist politician. He served as Prime Minister from 17 July 1984 to 20 March 1986. He was 37 years old when he was appointed and is, so far, the youngest Prime Minister of the Fifth Republic. He has been Foreign Minister since 16 May 2012.

Fabius was born in Paris, the son of Louise (born Strasburger-Mortimer; 1911–2010) and André Fabius (1908–1984). His parents were Jewish and converted to Catholicism; Fabius was raised an assimilated Catholic. His secondary education was at the Lycée Janson de Sailly and Lycée Louis-le-Grand. He was a graduate of institutions that are training grounds for academics (École normale supérieure (Ulm)), senior civil servants (École nationale d'administration) and future leaders (Sciences Po).

After his studies, he became an auditor for the Council of State. Member of the Socialist Party (PS) since 1974, he was first elected to the National Assembly in 1978 for the fourth constituency of Seine Maritime département. He quickly gained entry to the circle of François Mitterrand, the leader of the party.

When Mitterrand was elected president of France in 1981, Fabius was nominated Minister of the Budget. Two years later, he became Minister of Industry, and pursued the policy of "industrial restructuration". In 1984, a government shake up by Mitterrand led him to be appointed Prime Minister (choosing him over the likes of Pierre Bérégovoy and Jacques Delors) at the age of 37. He advocated a new kind of French socialism which accepted the market economy. In social policy, a law of December 1984 replaced allowance for orphans with a family support allowance, and empowered family allowance funds to aid in recovery of child support when a parent fails to pay. The allowable income for recipients of the young child allowance was increased (July 1984) for families with three or more children. The Fabius Government also sought to reduce penalties on families with working mothers by substantially increasing the income ceiling for dual-income families receiving the young child allowance. A parental education fund was created (1985), which provided for payments to each person who stops work or reduces hours of work as a result of the birth of any child beyond the first two, for which the parents is/are responsible. In addition, a new benefit was introduced for unemployed workers who had exhausted their eligibility for unemployment insurance.

In November 1984, an allowance was introduced if the parent concerned had been in employment for two or more years. Known as the “allocation parentale d’education,” this allowance provided 1,000 francs per month for parents who decided to take two years of parental leave after the birth of their first child. The “allocation au jeune enfant,” introduced in January 1985, was paid to all families at a flat rate for each child from the third month of pregnancy for nine months regardless of the parents’ income. Payment was to continue after this period for 8 out of 10 families for a further 32 months on a means-tested basis. In effect, this created a benefit for the first child in lower income families.

In June 1985, a law was passed allowing first offenders who had committed petty crimes to serve sentences of six months or less in public-service jobs. A July 1985 law tripled the amount of aid for victims of crimes. Legislation was introduced later that year to restrict the use of preventive detention and ensure that the rights of suspects were better protected.

In the field of education, much time and effort was spent on improving the system and educational outcomes. Vast sums were provided to improve technical education in schools, with closer ties established between education and industry, a programme was launched to train 25,000 teachers per annum in the use of computers, 100,000 computers were purchased for students to use, and 1 billion francs were provided for purchasing modern machine tools. The university system was reformed along practical, technological lines, with a degree in new technologies introduced, the reorientation of the first cycle to include greater emphasis on languages and new technologies, the provision of students with orientation and career opportunity meetings to help them plan their course of study in relation to the job market. Universities were encouraged to open up to industry and new technologies via training more skilled researchers and considering the practical needs of business. In 1985, a vocational baccalaureat was established to provide training for highly skilled workers.

In employment poicy, the Fabius Government introduced a number of measures designed to mitigate the effects of unemployment. In 1984, three youth training programmes were set up to ease the transition from school to work. The contrat de qualification (CQ) combined work and training for young workers during a 6-month to 2-year period. The contrat d'adaptation (CA) was aimed at to facilitating the hiring of young workers by adapting existing skills to the work setting. Under this scheme, individuals worked for a maximum 6-month period while receiving at least 200 hours of training. The stages d'initiation a La vie professionnelle (SIVP) provided schoolleavers with an initiation into work life to enable them to sample and then choose a career. The pre-training stages lasted for three to six months, with the worker receiving at least twenty-five hours of training a month. Participation in this scheme could lead to a CQ or CA.

During the early Eighties, the Socialists introduced the conge de conversion, or “conversion leave,” which received widespread publicity in 1984 when redundancy measures were introduced for the shipbuilding and steel industries. These combined the traditional tool of early retirement for redundant workers over the age of fifty with a "conversion leave" (conge de conversion) for others. These leaves suspended (but did not break) the work contract for a period of up to two years, and during this time the individual received 70% of their previous wage together with retraining in a new occupation. After the retraining was over, workers were promised two job offers. In 1985, the Fabius Government universalised the conge. The revamped conge de conversion offered redundant workers offered redundant workers 65% of their previous salary (in line with the benefits for early retirement and unemployment compensation) and a training period of 4-10 months. Between 1985 and 1987, however, only 15,000 workers had taken advantage of the conges, and only one-third succeeded in their "conversion." A year earlier, in 1984, the Fabius government established the travaux d'utilite collective (TUC) programme to prepare school leavers for professional life. This scheme offered unemployed youth between the ages of 16 and 21 sixteen (extended to 25 in 1985) the opportunity to work half time in a public sector job.

Despite the Fabius Government's achievements in social policy, it was unable to prevent a rise in social inequality during its time in office, a situation arguably exacerbated by austerity measures introduced by the government. Although the rate of inflation fell, unemployment continued to increase, standing at 11% in early 1986, compared with 8% in 1983. Concern over rising inequality in France was expressed in the publication of a number of books on both “the new poverty” and “social exclusion,” which had become major public preoccupations. As a result of a decline in unemployment insurance coverage, those who had no benefit had to fall bak on local charity and local assistance. This led to cases of some supermarkets providing free food parcels for unemployed persons. In 1985, the Fabius Government increased the wealth tax in order to provide subsidies for organisations providing basic services such as hot meals, agreed to make empty housing and surplus food stocks available, and decided to provide a basic allowance of 40 francs per day for some of the unemployed over the age of 50 who had been left out of the benefit scheme.

The Fabius Government's inability to prevent both rising unemployment and inequality arguably contributed to the defeat of the French Socialists in the 1986 legislative election, which led Fabius to step down as prime minister.

The symbol of a "modern" French socialism, he was weakened by the "infected blood scandal". His government was accused of having knowingly let doctors give haemophiliacs transfusions of blood infected by HIV. A judicial process similar to Impeachment acquitted him of all personal moral responsibility in the matter but he has never been absolved by public opinion.

After the sinking of the Rainbow Warrior, a Greenpeace ship, on 10 July 1985, Prime Minister Fabius summoned journalists to his office on 22 September 1985 to read a 200 word statement in which he said: "The truth is cruel," and acknowledged that "Agents of the French secret service sank this boat. They were acting on orders."

Fabius came to be seen as Lionel Jospin's rival to be Mitterrand's heir. He failed to win the First Secretaryship of the party in 1988 and 1990 (Rennes Congress) in spite of Mitterrand's support. Installed as President of the National Assembly in 1988 (at 41 years of age, the equal youngest in the history of the lower house), he succeeded finally in becoming First Secretary of the party in 1992, but resigned after the Socialist disaster of the 1993 legislative election.

He came back as President of the National Assembly in 1997, then as Minister of Economy and Finance in Lionel Jospin's cabinet between 2000 and 2002. After Jospin's retirement, he hoped to return as Socialist leader but he failed. He declared that his mind was changed about a number of matters and he joined the left-wing of the party.

In this position he was the leader of the defeated no camp in the vote that took place among the members of his party on 1 December 2004, to decide the stance that the party would take on the impending Referendum on the European Constitution. He went on to lead the rebel faction of the party advocating a no vote in the 2005 Referendum, and was seen as the spearhead of the whole no campaign in France. After the no vote won, the party leader gave an assurance that he could remain in the party though he was dismissed from the party's National Executive Committee.

On May 17, 2012, Laurent Fabius became Foreign Minister in the government of Jean-Marc Ayrault, appointed Prime Minister by President François Hollande.

Fabius was a candidate in the Socialist Party's primary election to be the party's candidate in the 2007 presidential election, but finished third, behind Ségolène Royal, the winner, and Dominique Strauss-Kahn. He was subsequently re-elected to the National Assembly in the June 2007 parliamentary election.