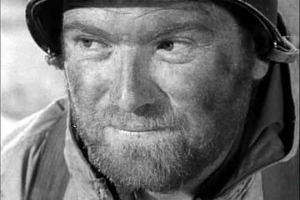 Evans was born in Holbrook, Arizona, but reared in Colton, California. His acting career began while he was serving in World War II. He performed with a theatrical troupe of GIs in Europe. Evans made his film debut in 1947 and appeared in dozens of films and television programs. He specialized in playing tough guys such as cowboys, sheriffs, convicts, and sergeants.

Evans appeared in numerous films produced, directed, and written by Samuel Fuller. In his memoirs A Third Face, Fuller described meeting Evans when casting his Korean War film The Steel Helmet (1950). Fuller threw an M1 Garand rifle at Evans, who caught it and inspected it as a soldier would have done. Evans had been a United States Army engineer in World War II. Fuller kept Evans and refused John Wayne for the role. and fighting to keep him despite Robert L. Lippert and his partner wanting Larry Parks for the role. Fuller walked off the film and would not return until Evans was reinstated. Evans also appeared in Fuller's Fixed Bayonets!, Hell and High Water, Shock Corridor and lost thirty pounds to play the lead in Park Row.

Evans portrayed the authoritarian but wise father, Rob McLaughlin, on the 1956-1957 CBS television series My Friend Flicka, based on a Western novel and film of the same name set in Wyoming. He appeared with Anita Louise, who played his wife, Nell; Johnny Washbrook, who played his son, Ken; and fellow character actor Frank Ferguson, who played the ranch handyman, Gus Broeberg, who addressed Evans as "Captain", a reference to Rob McLaughlin's service in the Union Army during the American Civil War.

In 1958, Evans co-starred as Major Al Arthur in the film, Damn Citizen, based on the life of crusading State Police superintendent Francis Grevemberg of Louisiana, played by Keith Andes. Grevemberg twice ran unsuccessfully for governor of Louisiana.

In 1960, Evans was cast as Otis Stockert in "The Frontiersman" on the NBC western series Wichita Town, with Joel McCrea. That same year, he was cast as Boone Hackett in the episode "Die Twice" of the CBS western series Johnny Ringo, with Don Durant.

Evans was cast in 1960 as United States Army Sergeant Dan Phillips, with James Griffith as Corporal Sam Giler, Ron Hagerthy as Phelan, and Stuart Randall as the historical General Winfield Scott, in the episode "The Quota" of another NBC western series, Riverboat. In the story line, Phillips shanghais Grey Holden (Darren McGavin) and a crew member of the river vessel, the Enterprise, to meet the Army's "quota" of new recruits.

Evans was cast as Walter Kopek, an undercover agent of the United States Treasury Department, in the episode, "The Moonshiners" (February 24, 1963), of the CBS anthology series, GE True, hosted by Jack Webb. In the story line, Kopek moved against a bootlegging operation in Florida run by the mobster Bill Munger (Robert Emhardt). James Griffith, with whom Evans had appeared on Riverboat, is cast in this episode as Stan Woolman.

In 1966 Evans appeared on the CBS courtroom drama series Perry Mason as Sheriff "Moose" Dalton in "The Case of the Scarlet Scandal."

In the fall of 1976, Evans starred in the 11-episode CBS adventure series, Spencer's Pilots, along with Christopher Stone, Todd Susman, and Britt Leach.

In January 1979, Evans appeared as Garrison Southworth in one episode of CBS's Dallas. He guest starred in ten episodes of CBS's Gunsmoke with James Arness, including two of the more remembered segments, "The Snow Train" and "Tatum". In 1965, Evans guest starred as Jake Burnett in the episode "Vendetta" of ABC's western series, The Legend of Jesse James starring Christopher Jones. Two years later, he appeared as Deedricks in the episode "Breakout" of another ABC western, Custer, starring Wayne Maunder in the title role.

In January 1982, Evans appeared in an episode of CBS's M*A*S*H entitled "Blood and Guts" as war reporter Clayton Kibbee.

In the late 1980s, Evans appeared on stage as the gruesome Papa in the stage production Papa is All, directed by playwright Tommy F. Scott in Jackson, Tennessee. He retired to a farm in Tennessee following his role in the original film version of Walking Tall.

Evans died of heart failure. He is buried in Highland Memorial Gardens in Jackson, Tennessee.