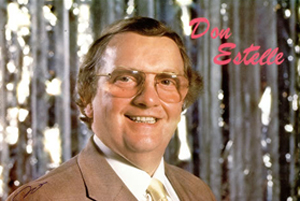 Born Ronald Edwards in Crumpsall, Manchester, he was raised in a house on Russel Street, Crumpsall. During World War II, at the age of eight, he was evacuated to Darwen, Lancashire, twenty miles away from his home town, to escape the German bombing of the city. It was here that he found his voice as a treble at the local Holy Trinity Parish Church (now called St Peter's) and, on returning home after the war, carried on singing at St Mary's Church, Crumpsall. He later joined a charity group, The Manchester Kentucky Minstrels, and with them, performed the Mario Lanza hit "Granada" in the talent show What Makes a Star? in 1954 at BBC Radio's northern studios in Manchester.

He gained some theatre experience by singing one song 12 times a week in the show The Backyard Kids at the Hulme Hippodrome in Manchester. He later toured the Northern Club circuit where he met the comedy actor Windsor Davies with whom he teamed up and toured the UK for four years. In the 1960s he had some cameo roles in Coronation Street and Dad's Army and eventually landed the perfect role for his talents playing the part of Gunner 'Lofty' Sugden in the 1970s British sitcom It Ain't Half Hot Mum. The character was dubbed with the ironic nickname of "Lofty" on account of Don Estelle's small stature (4 feet, 9 inches). He had a powerful tenor voice and as a spin-off from the series Estelle, and his co-star Windsor Davies, had a number one hit in the UK in 1975 with a semi-comic version of Whispering Grass. He also acted in the films Not Now Comrade, A Private Function (1984) and Santa Claus: The Movie (1984).

In the first series of The League of Gentlemen he made brief appearances in two episodes as Little Don, keeper of the Roundabout Zoo (a zoo on the island of a roundabout intersection).

In 2001, he appeared in one episode of Linda Smith's A Brief History of Timewasting as "Little Don" of the "East End Art Mafia".

In his privately-published autobiography Sing Lofty: Thoughts Of A Gemini, Estelle was extremely bitter about the state of modern-day entertainment, attacking those who refused to repeat It Ain't Half Hot Mum as "tight-crutched, white-trousered morons". And, in the words of his obituary in The Independent, "in recent years Estelle cut a slightly sorry figure, dressed in his 'Lofty' outfit, setting out a stall of his tapes and singing to passers-by in shopping centres. Similarly, he played a dirty old man in the promotional video for The Sun Page Three Girl Jo Hicks's single "Yakety Sax" (2001), The Benny Hill Show theme."

He spent his last years in Christchurch, New Zealand, returning to the UK only weeks before his death. He died in Rochdale Infirmary on 2 August 2003 and was buried in his adopted home town of Rochdale, with the oversized pith helmet in which he found fame as Gunner "Lofty" Sugden.