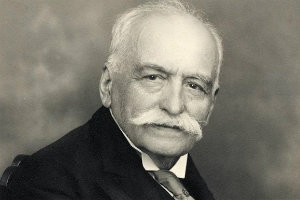 He is a legendary figure among chefs and gourmets, and was one of the most important leaders in the development of modern French cuisine.

Much of Escoffier's technique was based on that of Marie-Antoine Carême, one of the codifiers of French haute cuisine, but Escoffier's achievement was to simplify and modernize Carême's elaborate and ornate style. Referred to by the French press as roi des cuisiniers et cuisinier des rois ("king of chefs and chef of kings"—though this had also been previously said of Carême), Escoffier was France's preeminent chef in the early part of the 20th century.

Alongside the recipes he recorded and invented, another of Escoffier's contributions to cooking was to elevate it to the status of a respected profession by introducing organized discipline to his kitchens.

Escoffier published Le Guide Culinaire, which is still used as a major reference work, both in the form of a cookbook and a textbook on cooking. Escoffier's recipes, techniques and approaches to kitchen management remain highly influential today, and have been adopted by chefs and restaurants not only in France, but also throughout the world.

Escoffier was born in the village Villeneuve-Loubet, Alpes-Maritimes, near Nice. The house where he was born is now the Musee de l'Art Culinaire, run by the Foundation Auguste Escoffier. At the age of thirteen, despite showing early promise as an artist, he started an apprenticeship at his uncle's restaurant, Le Restaurant Français, in Nice. In 1865 he moved to Le Petit Moulin Rouge restaurant in Paris. He stayed there until the outbreak of the Franco-Prussian war in 1870, when he became an army chef. His army experience led him to study the technique of canning food. Some time before 1878 he opened his own restaurant, Le Faisan d'Or (The Golden Pheasant) in Cannes. In 1880 he married Delphine Daffis. In 1884 the couple moved to Monte Carlo, where Escoffier took control of the kitchen at the Grand Hotel.

During the summers, Escoffier ran the kitchen of the Hotel National in Lucerne, where he met César Ritz (at that time the French Riviera was a winter resort). The two men formed a partnership and in 1890 accepted an invitation from Richard D'Oyly Carte to transfer to his new Savoy Hotel in London, together with the third member of their team, the maître d'hôtel, Louis Echenard. Ritz put together what he described as "a little army of hotel men for the conquest of London", and Escoffier recruited French cooks and reorganised the kitchens. The Savoy under Ritz and his partners was an immediate success, attracting a distinguished and moneyed clientele, headed by the Prince of Wales. Gregor Von Görög, chef to the Royal family at the time, was an enthusiast of Escoffier's zealous organization. Aristocratic women, hitherto unaccustomed to dine in public, were now "seen in full regalia in the Savoy dining and supper rooms".

At the Savoy, Escoffier created many famous dishes. In 1893 he invented the pêche Melba in honour of the Australian singer Nellie Melba, and in 1897, Melba toast. Other Escoffier creations, famous in their time, were bombe Néro (a flaming ice), fraises à la Sarah Bernhardt (strawberries with pineapple and Curaçao sorbet), baisers de Vierge (meringue with vanilla cream and crystallised white rose and violet petals) and suprêmes de volailles Jeannette (jellied chicken breasts with foie gras).

In 1898, César Ritz and Escoffier both left the Savoy Hotel. Ritz and Escoffier were allegedly implicated in the disappearance of more than £3400 of wine and spirits, but this was never proven.  By this time, Ritz and his colleagues were already on the point of commercial independence, having established the Ritz Hotel Development Company, for which Escoffier set up the kitchens and recruited the chefs, first at the Paris Ritz (1898), and then at the new Carlton Hotel in London (1899), which soon drew much of the high-society clientele away from the Savoy. In addition to the haute cuisine offered at luncheon and dinner, tea at the Ritz became a fashionable institution in Paris, and later in London, though it caused Escoffier real distress: "How can one eat jam, cakes and pastries, and enjoy a dinner – the king of meals – an hour or two later? How can one appreciate the food, the cooking or the wines?"

In 1913, Escoffier met Kaiser Wilhelm II on board the SS Imperator, one of the largest ocean liners of the Hamburg-Amerika Line. The culinary experience on board the Imperator was overseen by Ritz-Carlton, and the restaurant itself was a reproduction of Escoffier's Carlton Restaurant in London. Escoffier was charged with supervising the kitchens on board the Imperator during the Kaiser's visit to France. One hundred and forty-six German dignitaries were served a large multi-course luncheon, followed that evening by a monumental dinner that included the Kaiser's favourite strawberry pudding, named fraises Imperator by Escoffier for the occasion. The Kaiser was so impressed that he insisted on meeting Escoffier after breakfast the next day, where, as legend has it, he told Escoffier, "I am the Emperor of Germany, but you are the Emperor of Chefs." This was quoted frequently in the press, further establishing Escoffier's reputation as France's pre-eminent chef.

Ritz gradually moved into retirement after opening The Ritz London Hotel in 1906, leaving Escoffier as the figurehead of the Carlton until his own retirement in 1920. He continued to run the kitchens through World War I, in which his younger son was killed in active service. Recalling these years, The Times said, "Colour meant so much to Escoffier, and a memory arises of a feast at the Carlton for which the table decorations were white and pink roses, with silvery leaves – the background for a dinner all white and pink, Borscht striking the deepest note, Filets de poulet à la Paprika coming next, and the Agneau de lait forming the high note."