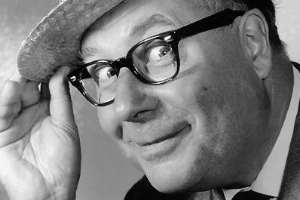 Heinz Erhardt was born in Riga, the son of Baltic German Kapellmeister Gustl Erhardt. He lived most of his childhood at his grandparents in Riga, where his grandfather, Paul Nelder, owned a music house. His grandfather also taught him how to play the piano.

After World War I, his father emigrated to Germany. Erhardt lived with his stepmother in Wennigsen near Hanover, where he attended school, until in 1924 he returned to Riga. From 1926 he studied at the Leipzig conservatory; however, Erhardt's wish to become a professional pianist was not supported by his grandparents who wanted him to work as a merchant. In 1935, Erhardt married Gilda Zanetti, daughter of the Italian consul in Saint Petersburg. They had four children: Grit, Verena, Gero, and Marita. Gero Erhardt became a film director and cinematographer, and his grandson, Marek Erhardt, became an actor.

Working at his grandfather's business, Erhardt alongside entered the stage as a cabaret artist in several Riga coffeehouses, and in 1937 even appeared on the German RRG radio. The next year, Erhardt moved to Berlin, where he performed on a Kabarett stage on Kurfürstendammm. The spectacle wearer and non-swimmer Erhardt was drafted into the German Kriegsmarine navy during World War II, but only on the third call-up; he served as a pianist in the Marine orchestra and only handled weapons during his basic training.

After the Second World War he moved to Hamburg-Wellingsbüttel and from 1948 worked as a radio presenter at the public NWDR radio station. From then on he became more and more famous for his countless pun poems. Also, he became a popular film actor and a mime. In his films he always played a character that fit his stage persona as an entertainer and comedian. His roles were polite and slightly weird persons typical of the West German Wirtschaftswunder ("economic miracle") era of the 1950s and 60s.

Heinz Erhardt suffered a stroke in 1971, which left him unable to speak or write. He was limited to reading and understanding the speech of others; these limitations ended his long career as an actor.

He was awarded the Order of Merit of the Federal Republic of Germany (Bundesverdienstkreuz) four days before his death in 1979.