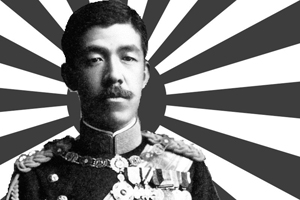 The Emperor’s personal name was Yoshihito. According to Japanese customs, the emperor has no name during his reign and is only called the (present) Emperor. Like all other Japanese emperors, since his death he has been known by a posthumous name that, according to a practice dating to his predecessor's death in 1912, is the name of the era coinciding with his reign.

Having ruled during the Taish? period (literally Great Righteousness), he is now known as Emperor Taish?. As this is not a personal name, more accurately he should be referred to as "the Taish? emperor".

Although outside Japan he is sometimes referred to as Yoshihito or Emperor Yoshihito, in Japan deceased emperors are referred to only by their posthumous names.

Prince Yoshihito was born at the Aoyama Palace in Tokyo to the Emperor Meiji and Yanagiwara Naruko, a concubine with the official title of gon-no-tenji. As was common practice at the time, the Meiji emperor's consort, Empress Sh?ken, was officially regarded as his mother. He received the personal name of Yoshihito Shinn? and the title Haru-no-miya from the emperor on 6 September 1879. His two older brothers had died in infancy, and he was also born sickly.

Prince Yoshihito contracted cerebral meningitis within three weeks of his birth, leaving him in poor health. (It has also been rumored that he suffered from lead poisoning, supposedly contracted from the lead-based makeup his wet nurse used.)[citation needed]

As was the practice at the time, Prince Yoshihito was entrusted to the care of Prince Nakayama Tadayasu, in whose house he lived from infancy until the age of seven. Prince Nakayama had also raised Emperor Meiji as a child.

From March 1885, Prince Yoshihito moved to the Aoyama Detached Palace, where he was tutored in the mornings on reading, writing, arithmetic, and morals, and in the afternoons on sports, but progress was slow due to the Prince’s poor health and frequent fevers.[3] From 1886, he was taught together with 15–20 selected classmates from the ?ke and higher ranking kazoku peerage at a special school, the Gogakumonsho, within the Aoyama Palace.

Prince Yoshihito was officially declared heir on 31 August 1887, and had his formal investiture as crown prince on 3 November 1888. While crown prince, he was known as Togu.

Crown Prince T?gu with his father and mother strolling in Asukayama Park accompanied by ladies of the court. Ukiyo-e woodblock print by Y?sh? Chikanobu, 1890.

In September 1887 the prince entered the elementary department of the Gakushuin, but due to his health problems he was often unable to continue his studies. He spent much of his youth by the sea at the Imperial villas at Hayama and Numazu for health reasons. Although the prince showed skill in some areas, such as horse riding, he proved to be poor in areas requiring higher-level thought. He was finally withdrawn from Gakushuin before finishing the middle school course in 1894. However, he did appear to have an aptitude for languages and continued to receive extensive tutoring in French, Chinese, and history from private tutors at the Akasaka Palace; Emperor Meiji gave Prince Takehito responsibility for taking care of Prince Yoshihito, and the two princes became friends.

From 1898, largely at the insistence of It? Hirobumi, the Prince began to attend sessions of the House of Peers of the Diet of Japan as a way of learning about the political and military concerns of the country. In the same year, he gave his first official receptions to foreign diplomats, with whom he was able to shake hands and converse graciously.[4] His infatuation for western culture and tendency to sprinkle French words into his conversations was a source of irritation for Emperor Meiji.[5]

In October 1898, the Prince also traveled from the Numazu Imperial Villa to Kobe, Hiroshima, and Etajima, visiting sites connected with the Imperial Japanese Navy. He made another tour in 1899 to Ky?sh?, visiting government offices, schools and factories (such as Yawata Iron and Steel in Fukuoka and the Mitsubishi shipyards in Nagasaki).[6]

On 10 May 1900, Crown Prince Yoshihito married the then 15-year-old Kuj? Sadako (the future Empress Teimei), daughter of Prince Kuj? Michitaka, the head of the five senior branches of the Fujiwara clan. She had been carefully selected by Emperor Meiji for her intelligence, articulation, and pleasant disposition and dignity – to complement Prince Yoshihito in the areas where he was lacking.[2] The Akasaka Palace was constructed from 1899 to 1909 in a lavish European rococo style, to serve as the Crown Prince's official residence. The Prince and Princess had the following children:

In 1902, the Prince continued his tours to observe the customs and geography of Japan, this time of central Honsh?, where he visited the noted Buddhist temple of Zenko-ji in Nagano.[7] With tensions rising between Japan and Russia, the Prince was promoted in 1903 to the rank of colonel in the Imperial Japanese Army and captain in the Imperial Japanese Navy. His military duties were only ceremonial, but he traveled to inspect military facilities in Wakayama, Ehime, Kagawa and Okayama that year.[8]

In October 1907, the Crown Prince toured Korea, accompanied by Admiral T?g? Heihachir?, General Katsura Tar?, and Prince Arisugawa Taruhito. It was the first time an heir apparent to the throne had ever left Japan.[9] During this period, he began studying the Korean language, although he never became proficient at it.

On 30 July 1912, upon the death of his father, Emperor Meiji, Prince Yoshihito succeeded him on the throne. The new emperor was kept out of view of the public as much as possible. Having suffered from various neurological problems throughout his life, by the late 1910s, these maladies made it increasingly impossible for him to carry out public functions. On one of the rare occasions he was seen in public, the 1913 opening of the Diet of Japan, he is famously reported to have rolled his prepared speech into a cylinder and stared at the assembly through it, as if through a spyglass.[10] Although rumors attributed this to poor mental condition, others, including those who knew him well, believed that he may have been checking to make sure the speech was rolled up properly, as his manual dexterity was also handicapped.[11]

His lack of articulation and charisma as opposed to Emperor Meiji, his disabilities and eccentricities led to an increase in incidents of lèse majesté. As his condition deteriorated, he had less and less interest in daily political affairs, and the ability of the genr?, Keeper of the Privy Seal, and Imperial Household Minister to manipulate his decisions came to be a matter of common knowledge.[12]

After 1918, he no longer was able to attend Army or Navy maneuvers, appear at the graduation ceremonies of the military academies, perform the annual Shinto ritual ceremonies or even attend the official opening of sessions of the Diet of Japan.[13]

Taish?'s reclusive life was unaffected by the Great Kant? Earthquake of 1923. Fortuitously, he had moved by royal train to his summer palace at Nikko the week before the disaster; but his son, the Prince Regent, remained at the Imperial Palace where he was at the heart of the event.[15] Carrier pigeons kept the emperor informed as information about the extent of the devastation became known.[16]

In early December 1926, it was announced that the emperor had pneumonia. Taish? died of a heart attack at 1:25 a.m. in the early morning of 25 December 1926, at the Hayama Imperial Villa at Hayama, on Sagami Bay south of Tokyo (in Kanagawa Prefecture).[17]

Taish? has been called the first Tokyo emperor because he was the first to live his entire life in or near Tokyo. Taish?'s father was born and reared in Kyoto; and although he later lived and died in Tokyo, Meiji's mausoleum is located on the outskirts of Kyoto, near the tombs of his Imperial forebears; but Taish?'s grave is in Tokyo, in the Musashi Imperial Graveyard in Hachi?ji.[18] His son, the Emperor Showa, is buried next to him.

Cuisine of the Emperor

Emperor Taisho was initially exposed to new foods by the Western diplomatic corps. Through this exposure he created beef fried Taish? Tonkatsu, which became a regular part of his palace menu. After World War I, his personal chef released this menu publicly. Today, Taish? Tonkatsu is a popular dish in Japan.