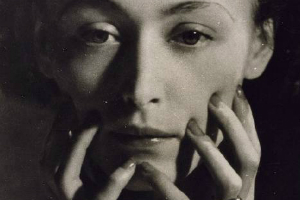 Born Maria Benz in Mulhouse (then part of the German Empire), she met Swiss architect and artist Max Bill in the Odeon Café in Zurich; he nicknamed her "Nusch", a name she would stick to. Their liaison ended after six months when Max Bill's plan to marry her in order to avoid her pending extradition from Switzerland was vetoed by his father (to whom he owed a substantial amount of money due to medical expenses following an accident which had forced him to leave the Bauhaus).

Nusch arrived in France as a stage performer, variously described as a small-time actress, a traveling acrobat, and a "hypnotist's stooge". She met Paul Éluard in 1930 working as a model, married him in 1934, produced surrealist photomontage and other work, and is the subject of "Facile," a collection of Éluard's poetry published as a photogravure book, illustrated with Man Ray's nude photographs of her.

She was also the subject of several cubist portraits and sketches by Pablo Picasso in the late 1930s, and is said to have had an affair with him. Nusch worked for the French Resistance during the Nazi occupation of France during World War II. She died in 1946 in Paris, collapsing in the street due to a massive stroke.