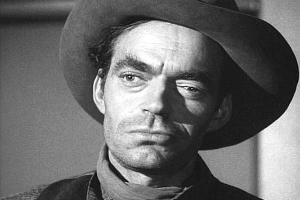 William Scott "Jack" Elam (November 13, 1920 – October 20, 2003) was an American film actor best known for his numerous roles as villains in Western films and, later in his career, comedies (sometimes spoofing his villainous image). His most distinguishing physical quality was the left iris of his eye, which was skewed to the outside, making him look unnaturally "wide eyed" (the opposite of cross eyed).

Elam was born in Miami, Arizona, to Millard Elam and Alice Amelia Kirby. Kirby died in 1924 when Jack was not quite four years old. By 1930, he was once again living with his father, older sister Mildred, and their stepmother, Flossie (Varney).

He grew up picking cotton and lost the sight in his left eye during a boyhood accident when he was stabbed with a pencil at a Boy Scout meeting. He was a student of both Miami High School in Gila County and Phoenix Union High School in Maricopa County graduating from there in the late 1930s.

Elam attended Santa Monica Junior College in California and subsequently became an accountant in Hollywood; one of his clients was movie mogul Samuel Goldwyn. At one time, he was the manager of the Bel Air Hotel in Los Angeles.

In 1949, Elam made his debut in She Shoulda Said No!, an exploitation film where a chorus girl's marijuana smoking ruins her career and drives her brother to suicide. He appeared mostly in westerns and gangster films playing villains. Elam made multiple guest star appearances in many popular Western television series in the 1950's and 1960's, including "Gunsmoke" , "The Rifleman", "Lawman (TV series)", "Bonanza", "Cheyenne", "Have Gun Will Travel", "Zorro", "The Lone Ranger" and "Rawhide". In 1961, Elam played a slightly crazed character in an episode of The Twilight Zone, "Will the Real Martian Please Stand Up?."

In 1963, Elam got a rare chance to play the good guy when he played the part of Deputy Marshal J.D. Smith in The Dakotas, a TV western that ran for only nineteen episodes. He also was in the TV series Temple Houston playing George Taggart. In 1968, he played perhaps his shortest role in Once Upon a Time in the West where he was a gunslinger sent to kill Charles Bronson's character. In that part, Elam spent a large part of the original scene playing with a fly he managed to catch in his gun barrel. He played an eccentric sidekick to John Wayne in Howard Hawks's Rio Lobo (1970). In 1969, Elam was given his first comedic role in Support Your Local Sheriff! and later in Support Your Local Gunfighter, both opposite James Garner, after which he found his villainous parts dwindling and his comic roles increasing.

In 1985, Elam played Charlie in The Aurora Encounter. During this film Elam made a lifelong relationship with a 11-year-old boy named Mickey Hays, who suffered from progeria. As shown in the documentary I Am Not A Freak viewers see how close Elam and Hays really were. Elam said, "You know I've met a lot of people, but I've never met anybody that got next to me like Mickey."

In 1994, Elam was inducted into the Hall of Great Western Performers of the National Cowboy and Western Heritage Museum.

Elam classified the stages of a moderately successful actor's life, as defined by the way a film director refers to the actor suggested for a part. (He said this on a George Plimpton ABC documentary about the making of Rio Lobo.) This humorous quote has also been attributed to other actors and writers, such as Harvey Miller, Ricardo Montalban, and Mary Astor:

He was married twice, first to Jean Elam from 1937 to her death in 1961 and second, Margaret Jennison from 1961 until his death in 2003. Elam had two daughters, Jeri Elam and Jacqueline Elam, and a son, Scott Elam. Elam died in Ashland, Oregon, of congestive heart failure.