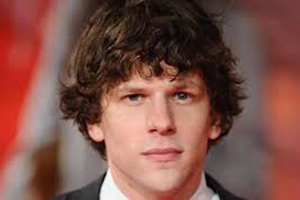 Jesse Adam Eisenberg (born October 5, 1983) is a Bafta-nominated American actor. He has played notable roles in films such as Adventureland, The Squid and the Whale and Zombieland.

Eisenberg was born in Queens, New York City, New York, the son of Amy, who worked as a clown, and Barry Eisenberg, who ran a hospital and later became a college professor. His sister, Hallie Kate Eisenberg, is a former child actress. His family is Jewish. Eisenberg was raised in Queens and New Jersey, attending the East Brunswick Public Schools at Frost School, Hammarskjold Middle School, Churchill Junior High School, and his sophomore year at East Brunswick High School.

Eisenberg currently studies at The New School in New York City's Greenwich Village neighborhood. Originally, he had applied to New York University, but declined enrollment in order to complete a film role.
Career

Eisenberg made his Broadway debut as an understudy in a 1996 revival of Summer and Smoke. He made his screen debut on the 1999 television series Get Real, which was canceled in 2000. After appearing in the made-for-television film Lightning: Fire from the Sky, he starred in the independent film, Roger Dodger (for which he won an award at the San Diego film festival), and in The Emperor's Club, both of which were released in 2002 to generally positive reviews.

In 2005, Eisenberg appeared in Cursed, a horror film directed by Wes Craven, and The Squid and the Whale, a well-reviewed independent drama also starring Laura Linney and Jeff Daniels. His stage credits include Scarcity at the Atlantic Theater Company (2007) and a workshop production of Lyle Kessler's Orphans in Los Angeles (2006). In 2007, he starred opposite Richard Gere and Terrence Howard in The Hunting Party, a comic thriller in which he plays a young journalist in Bosnia.

In 2009, Eisenberg played the lead role in Adventureland, a comedy directed by Greg Mottola and filmed in Kennywood Park near Pittsburgh, Pennsylvania. Filming ended in October 2007 and the movie premiered at the Sundance Film Festival in 2009. Fellow cast members included Kristen Stewart, Kristen Wiig, Ryan Reynolds and Bill Hader. In November 2007, Eisenberg was cast in an indie comic-drama, Holy Rollers. He plays a young Hasidic Jew who gets lured into becoming an ecstasy dealer. Filming took place in New York in 2008. After Zombieland, Eisenberg will star in another horror film, Camp Hope, directed by George Van Buskirk.

He plans to write for stage and screen.