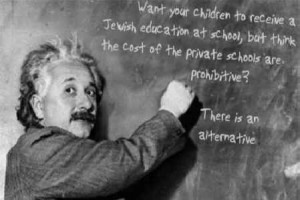 Albert Einstein (March 14, 1879 – April 18, 1955) was a German-born theoretical physicist who is best known for his theory of relativity and specifically mass-energy equivalence, E = mc2. He was awarded the 1921 Nobel Prize in Physics "for his services to Theoretical Physics, and especially for his discovery of the law of the photoelectric effect."

His other contributions include relativistic cosmology, capillary action, critical opalescence, classical problems of statistical mechanics and their application to quantum theory, an explanation of the Brownian movement of molecules, atomic transition probabilities, the quantum theory of a monatomic gas, thermal properties of light with low radiation density (which laid the foundation for the photon theory), a theory of radiation including stimulated emission, the conception of a unified field theory, and the geometrization of physics.

Works by Albert Einstein include more than fifty scientific papers but also non-scientific works, including About Zionism: Speeches and Lectures by Professor Albert Einstein. (1930), "Why War?" (1933, co-authored by Sigmund Freud), The World As I See It (1934), Out of My Later Years (1950), and a book on science for the general reader, The Evolution of Physics (1938, co-authored by Leopold Infeld).

In 1999 Einstein was named Time magazine's "Person of the Century", and a poll of prominent physicists named him the greatest physicist of all time. In popular culture the name "Einstein" has become synonymous with genius.

In 1921, Einstein was awarded the Nobel Prize in Physics, "for his services to Theoretical Physics, and especially for his discovery of the law of the photoelectric effect". This refers to his 1905 paper on the photoelectric effect: "On a Heuristic Viewpoint Concerning the Production and Transformation of Light", which was well supported by the experimental evidence by that time. The presentation speech began by mentioning "his theory of relativity [which had] been the subject of lively debate in philosophical circles [and] also has astrophysical implications which are being rigorously examined at the present time." (Einstein 1923)

Einstein travelled to New York City in the United States for the first time on April 2, 1921. When asked where he got his scientific ideas, Einstein explained that he believed scientific work best proceeds from an examination of physical reality and a search for underlying axioms, with consistent explanations that apply in all instances and avoid contradicting each other. He also recommended theories with visualizable results (Einstein 1954).