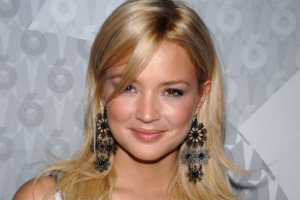 Virginie Efira (born 5 May 1977 in Brussels) is a Belgian actress, and anchor on French Television.

She was first hired by Club RTL (A Belgian TV channel in the RTL Group) to present a children's show called Mégamix. She went on to present other programmes in Belgium, including A la recherche de la nouvelle Star. In September 2002 she was offered the job of the presenter of Belgian's version of Star Academy. After casting to be a weather girl on France's M6 channel, she was soon pushed into the limelight as one of M6's main public faces, presenting shows such as Le Grand Zap, La saga des ..., Follement Gay, Absolument 80/90, Le Grand Piège and Drôles d'équipes. She was the host of Classé Confidentiel for one year, before replacing Benjamin Castaldi as the host of the popular musical reality show Nouvelle Star for the end of the show's fourth series. She also present various shows on RTL-TVi (a spin-off channel in the RTL Group). Efira was a guest star on the highly successful French show Kaamelott.

Efira's film career took off in 2004, appearing as Dr. Liz Wilson in the French-language version of Garfield: The Movie, as well as playing Piper in the French version of the 2005 film Robots. In 2012, she was nominated for the Magritte Award for Best Supporting Actress, and went on to win the Audience Award.

In 2010, she participated in Rendez-vous en terre inconnue.

She was married to Patrick Ridremont from 2002 to 2005 when they separated. They filed for divorce in February 2009. She is now in a relationship with Mabrouk El Mechri, with whom she has a daughter, Ali, born 24 May 2013.