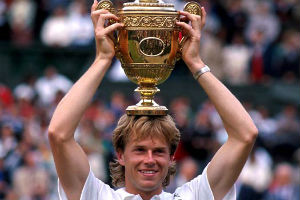 Stefan Bengt Edberg (born 19 January 1966) is a Swedish former World No. 1 professional tennis player (in both singles and doubles) from Sweden. A major proponent of the serve-and-volley style of tennis, he won six Grand Slam singles titles and three Grand Slam men's doubles titles between 1985 and 1996 and the only player ever to win the 'Junior Grand Slam'.

He also won one season-ending championship title, the Masters Grand Prix, was a part of the Swedish Davis Cup winning team four times and won an Olympic Gold medal in Singles in 1984 when Tennis was an exhibition sport. In addition he won four Masters Series titles and four Championship Series titles, was ranked in the Singles Top 10 for ten successive years per ATP Rankings data, 9 years on the trot in the Top 5, and is considered one of the greatest players of his era. Edberg is the childhood idol of Roger Federer.

Edberg first came to the tennis world's attention as a junior player. He won all four Grand Slam junior titles in 1983 to become the first-ever player to achieve the "Junior Grand Slam". Later that year as a professional, Edberg won his first career doubles title in Basel. Edberg accidentally caused the death of Dick Wertheim with an errant serve during the 1983 US Open.

In 1984, Edberg won his first top-level singles title in Milan. Edberg also won the tennis tournament at the 1984 Summer Olympics when the sport was an exhibition event and partnered with fellow Swede Anders Järryd to reach the final of the US Open. Edberg also reached the French Open doubles final with Järryd in 1986 and consequently was World No. 1 in doubles in that year.

In 1988, Edberg reached the first of three consecutive finals at Wimbledon. In all three finals, he played Boris Becker in what became one of Wimbledon's greatest rivalries. Edberg won their first encounter in a four-set match spread over two days because of rain delays. A year later, Becker won in straight sets. The closest of their matches came in the 1990 final, when Edberg won in five sets after being down a break in the fifth set. In 1990, an abdominal muscle injury forced Edberg to retire from the Australian Open final while trailing Ivan Lendl 5–2 (including two breaks of serve) in the third set. Edberg nevertheless took the World No. 1 ranking from Lendl on 13 August 1990 by winning the Super 9 tournament in Cincinnati. He held it for the rest of that year and for much of 1991 and 1992. Edberg spent a total of 72 weeks as World No. 1. In 1991 Edberg again reached the Semi Finals of Wimbledon but lost to Michael Stich in a close match: 4–6,7–6,7–6,7–6.

Edberg's final two Grand Slam singles triumphs came at the US Open, with wins over Jim Courier in the 1991 final and Pete Sampras in the 1992 final, who was just months away from being ranked No. 1 in the world.

In 1996, Edberg reached the finals of Queens club but lost the match to Boris Becker . He won his third and final Grand Slam doubles title at Australian Open with Petr Korda.He reached Quarterfinals of his last US open after Defeating Richard Krajeck & Tim Henman but lost the QF to Goran Ivansevic.

Edberg was most comfortable playing tennis on fast-playing surfaces. Of his six Grand Slam singles titles, four were won on grass courts at the Australian Open (1985 and 1987) and Wimbledon (1988 and 1990) and two were won on hardcourts at the US Open (1991 and 1992).

Edberg is noted as the finest serve-and-volley player of his era and arguably the greatest of all-time. Edberg did not possess a powerful dominating serve like Pete Sampras or Boris Becker but still had a very effective serve. Edberg would often choose to use a less powerful serve, such as a kick or slice serve. This extra time from using a slower serve gave Edberg more time to get to the net, where he used his quick feet and athleticism to gain control of the point at the net. Edberg also had an excellent volley, and could easily redirect powerfully struck balls to the open court. He also had sufficient groundstrokes, and his one-handed backhand is also one of his best shots. Edberg's backhand was one of the most effective and considered the finest of his era.

In September 2008, Stefan Edberg officially joined the Black Rock Tour of Champions, a tour for professional tennis players who have since retired from the ATP Tour. Edberg won his first tournament in Paris held on clay, winning matches against clay court specialists Thomas Muster in the opening round and Sergi Bruguera in the finals on Sunday, 21 September 2008.[5]

In January 2012, Edberg played a 1 set exhibition against Jo-Wilfried Tsonga in Doha, Qatar, and lost 7–5.

Since the Association of Tennis Professionals (ATP) computer rankings began, Edberg and John McEnroe are the only men to be ranked World No. 1 in both singles and doubles. Edberg is also the only player to achieve the 'Junior Grand Slam' in history of the game.

Edberg and Boris Becker are the only male tennis players ever to receive the United Press International Athlete of the Year Award (with Edberg having received the award in 1990).

During his career, Edberg won a total of 42 top-level singles titles (6 majors) and 18 doubles titles (3 majors) and appeared in a then record 54 consecutive Grand Slam tournaments (since then broken by Wayne Ferreira).

He was ranked the World No. 1 in singles for a total of 72 weeks.

In 2004, Edberg was inducted into the International Tennis Hall of Fame in Newport, Rhode Island, United States.

Edberg is considered by Tennis Magazine as the 14th greatest player, counting both male and female tennis players, of the Tennis Era. Counting men only, Edberg ranks 8th.

Edberg was awarded the Svenska Dagbladet Gold Medal in 1990.

Edberg is one of the few players who reached the final of all four Grand Slam tournaments, winning three of them. In the 1989 French Open final, Edberg lead the match by two sets to one over Michael Chang and had numerous break points during the fourth and fifth sets. He eventually led the match by a break in the fifth set but could not win it.

Edberg won several Grand Slam matches after being down a break of service in the fifth and deciding set. Notable examples include the 1988 Wimbledon semifinal against Miloslav Me?í?, the 1989 French Open semifinal against Boris Becker, and the 1990 Wimbledon final against Becker. In the 1992 US Open, Edberg did it in three consecutive matches, against Richard Krajicek in the fourth round, Ivan Lendl in the quarterfinals, and Chang in the semifinals. In all these examples except the 1989 French Open final, Edberg went on to win the title.

Edberg's distinctive serve is used as the logo for the Australian Open.

Edberg was born in Västervik, Sweden.

He is married to Annette Hjort Olsen. They have two children, Emilie and Christopher. (Olsen was once romantically linked to Edberg's tennis rival Mats Wilander before her marriage to Edberg.