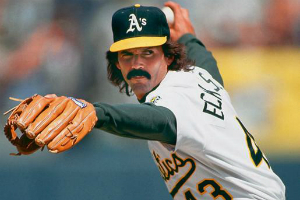 He pitched in the Division Series in 1996, has pitched in six Championship Series Games, three World Series Games and six All-Star Games. After attending Washington College in Fremont, CA., he was selected by the Cleveland Indians in the third round of free-agent draft picks 6/06/1972. Eckersley has played for the Boston Red Sox, Chicago Cubs, Oakland Athletics, St. Louis Cardinals and re-signed with the Boston Red Sox 12/09/1997. He was placed on the disabled list in 1985, 1989 and 1996.

Eck was inducted into the Baseball Hall of Fame on Sunday, July 25, 2004 in a ceremony that began at 1:30 PM in Cooperstown, NY.