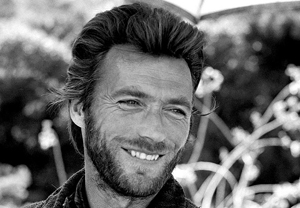 American actor in tough-guy roles, a rugged 6'4" star with a face that has become craggier every year. He had an early start in a TV Western, “Rawhide,” and then moved on to do "spaghetti westerns," directed by Sergio Leone and shot in Italy and Spain. Adding directing, producing, composing and even politics to his repertoire, Eastwood’s career accomplishments have ensured his reputation as one of the most respected and durable stars in Hollywood.

A Depression kid, Eastwood's dad was constantly looking for work, and he grew up learning that "nothing comes from nothing, you've got to work for what you get." The family moved often and he was the new kid on the block, going to eight schools before he was a teen, always having to punch his way out of something. He was big and fast, and he reports that that he lost his virginity at 14. He grew up introverted and self-reliant, qualities that have been a repeated theme in his film roles. At 15, Eastwood learned to play piano, and he played jazz and honky-tonk piano at local saloons in exchange for food. After graduation, he drifted from one job to the next, working as a lumberjack, forest firefighter and steel worker, with no idea of what he wanted to do. Drafted into the military during the Korean War, he was a swimming instructor at Fort Ord, CA.

After his discharge in 1953 he enrolled in Los Angeles City College and made the rounds at the studios. He was hired as a contract player for $75 a week and played in bit parts, landing his breakthrough role in the TV series “Rawhide” in 1959. He played handsome Rowdy Yates in the popular series until 1966 and then graduated first to stony-faced macho roles in westerns and then to detective films as his famous character "Dirty Harry." In 1969 he starred in the movie version of the musical “Paint Your Wagon” and followed it with the lead role in the thriller "Play Misty for Me" (1971), which he also directed. Not busy enough with directing and starring in films, composing and playing the piano, the multi-talented star entered politics in 1986 when he decided to run for mayor of Carmel, CA where he lived. He won by a huge margin. After serving one term he declined to run for a second.

Eastwood won the Best Director Oscar for his film, "Unforgiven," on March 29, 1993. The film, in which he acted as well as directed, won the Oscar for Best Picture as well. Since the early '70s, when Eastwood brought his Malpaso Productions to Warner Bros. Burbank lot, he has directed over 25 films. His “Mystic River” in 2003 and “Million Dollar Baby” in 2004 were critically acclaimed, award-winning blockbusters.

Eastwood becomes silent when asked about his active private life. He married in 1953, and, after 25 years of marriage and two kids, the couple separated. They arrived at a $25 million settlement. His 14-year affair with Roxanne Tunis produced one daughter, and he became father to two children by Jacely Reeves. He and actress Sondra Locke (born probably 28 May 1944) lived together 1975 - 1989 in a relationship that ended in legal wrangling. In 1993, he had a daughter Francesca with actress Frances Fisher (11 May 1952). In April that same year, he met 27-year-old news anchor Dina Ruiz (born 11 July 1965) when she interviewed him; they married on March 31, 1996, and their daughter was born in December 1996. By then he had a total of seven children from five women. When biographer Patrick McGilligan claimed that Eastwood was a wife-beater, an atheist and a coward, the star responded with a lawsuit for $10 million in December 2002. Ruiz filed for divorce in October 2013.

Eastwood’s 60-film, 50-year career keeps on delighting his audiences and, with his later work, has impressed the critics as well. He works out tirelessly and at age 74 he can do 30 dips at the bar. He shows little sign of slowing down personally or professionally. When Leslie Stahl asked him in a February 2005 interview about retirement, he said, “"I'm just never going to say never. Or never say anything. That's the main thing. It's just — just keep my big mouth shut."

At the Academy Award ceremony held on February 27, 2005, Eastwood's "Million Dollar Baby" won four Oscars, including Best Picture. Although Eastwood lost in the Best Actor category, just as he had done for "Unforgiven," he took home the Oscar for Best Director. The other two Oscars went to Eastwood's leading lady, Hilary Swank, and to his supporting actor, Morgan Freeman.