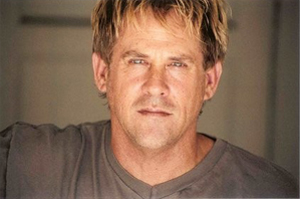 Dudikoff comes from a small family. His father, Joseph Stephen Michael Senior, was a Christian Orthodox from Russia, and served in the Army before marrying Dudikoff’s mother, a French-Canadian native from Quebec who was extremely talented on the piano. The couple moved to California in the mid-1970s and had five children. Dudikoff is the fourth of the group.

Dudikoff graduated from West High School in Torrance, California and was studying child psychology at Harbor College, when he was discovered as a model. During this time, he also worked at a rehabilitation center for abused youth called Cedar House. He waited tables at Beachbum Burt’s in Redondo Beach, California to pay for his education.

During lunch one day, Dudikoff served Max Evans, a fashion editor with Esquire magazine, who came in with some models. Evans asked Dudikoff to walk in a Newport Beach fashion show, and his mother encouraged him to try it out.

After a couple of successful runways, Dudikoff retained an agent at the Mary Webb Davis Agency in Los Angeles. Dudikoff soon entered the high fashion world and counted Calvin Klein and GQ among his clients. He moved quickly to international print modeling and traveled between New York, Los Angeles, and Milan by his late 20s.

Dudikoff soon began acting, and he starred in several commercials for companies, including Coppertone, Coca-Cola for Japan, Army Reserve and Stridex.

His first television role took place after a meeting with theatrical agent Sid Craig. It was at this time that he landed the part as Joanie’s first boyfriend in the American sitcom Happy Days. Other television work included roles in Dallas, Gimme a Break!, and a Columbia Pictures movie-of-the-week called Sawyer & Finn. He was also in Bounty Hunters. He is widely recognized for playing the character Private Joe Armstrong in the American Ninja (1985). The American Ninja series contained five movies.

Dudikoff mentioned in an interview with TRASHOTHEK in September 2012 that he had a desire to be in The Expendables 3. He also hinted at a possible sequel to American Ninja and Avenging Force.  He has a small cameo in the 2013 action movie Olympus Has Fallen.

Dudikoff is married and has two children: daughter, Nancy; son, Joseph Stephen Michael III. The Dudikoffs also own two chihuahuas. He can speak a little Russian.