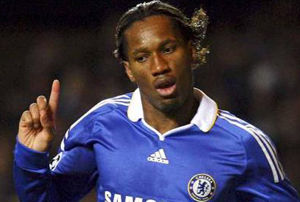 Didier Yves Drogba Tébily (born March 11, 1978 in Abidjan, the Ivory Coast) is a footballer from the Ivory Coast who currently plays for Chelsea FC in the English Premier League.

Early life
Born in Abidjan on 11 March 1978, Didier Drogba spent his childhood in his home country the Ivory Coast and his adopted France. ‘Tito’ as he was known to friends and family, first left the country of his birth at the age of five. He headed for Brest in Brittany, where his uncle, Michel Goba, was a professional footballer. Drogba spent three years there with his uncle, living in Brest, Angoulême and Dunkerque, before returning home.

Following a downturn in economic conditions, he returned to live with his uncle in Dunkerque, though he continued to move around France as a youngster. It was at this time that he began to play football. In 1991 his parents also travelled to France, first to Vannes and then in 1993 settling at Antony in the Paris suburbs, at which point the 15-year-old Drogba rejoined his family. He signed for local club Levallois, where he rose through the ranks, playing for them in National 2, the fourth french level, aged 18..

International
Drogba is a Côte d'Ivoire international and helped the team qualify for its first ever World Cup Finals, held in Germany in 2006. His first cap came the September 9, 2002 againt South Africa (0-0). He scored his first goal with "The Elephants" the February 2, 2003 in Cameroon (victory 3-0). He scored nine goals in eight qualifying games - statistically one of the best records in international football. In February 2005 he was voted runner-up to Samuel Eto'o in the African Footballer of the Year awards. He has scored 24 times in 34 caps, as of June 17, 2006.

In February 2006, Drogba captained Côte d'Ivoire to their second African Cup of Nations final, scoring the only goal in their semi-final match with Nigeria and putting away the deciding spot-kick in their record-equalling 12-11 penalty shootout quarter-final win over Cameroon. However, they lost in the final to Egypt 4-2 on penalties after a 0-0 draw, with Drogba missing a penalty in the shoot-out.

In the 2006 World Cup, Côte d'Ivoire was drawn in a "group of death" with Serbia and Montenegro, the Netherlands and Argentina. On June 10, 2006, Drogba scored the first World Cup goal of his career and of his country's history in the opening game against Argentina, but his team lost 2-1. At the post-match press conference, Drogba praised his team-mates for a good overall performance (singling out Bakari Kone and Didier Zokora in particular), but said that he and his team-mates have to work at cutting out mistakes and becoming better organised. "The difference between big teams like Argentina and small teams like us," Drogba said, "is that the big teams make the small teams pay for their mistakes. When you play opponents like Argentina, when you make little mistakes, you pay."

Côte d'Ivoire were eliminated from the World Cup after their next game, a 1-2 defeat to the Netherlands, but came from 0-2 down to beat Serbia and Montenegro 3-2 in their final group game, with Drogba watching from the sidelines following suspension. Drogba was seen celebrating wildly with his Ivorian teammates in the dugout at the final whistle. He later told German television that he was "immensely proud" of his teammates, and felt that the team had done Africa proud, especially by demonstrating resolve and refusal to accept defeat.

In February 2007, Drogba was appointed as UNDP Goodwill Ambassador