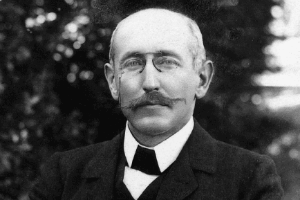 French military officer whose charge of treason and subsequent exile to Devil’s Island penal colony became a symbol for the rising anti-Semitic sentiment in Europe. The fight to prove his innocence lasted 12 years, becoming notorious as The Dreyfus Affair. He was denied a hearing until his plight became a national cause, causing rifts between intellectuals not only in France but in all of Europe and the United States. It unleashed racial violence and led to the publication of history's most famous call for justice addressed to the President of France by Emile Zola, who was to become in the words of Anatole France "the conscience of mankind." The repercussions of the Affair were felt worldwide for decades to come.

Albert Dreyfus was the seventh and youngest child of Jeannette and Jacob Dreyfus, industrialist. The Alsatian Jewish family loosened its ties to Judaism in order to strengthen its ties with France, during a period when anti-Semitic sentiment reached an increasing fervor in Europe.

From the time that he was ten and watched German soldiers enter the city, the boy wanted to be a soldier, He entered Ecole Polytechnique in 1878, becoming a Lieutenant in 1882 and rising to the rank of Captain in1889. He attended the Ecole de Guerre 1890-’92 when he graduated ninth in his class. Dreyfus joined the general staff of the Ministry of War in 1893 where he was the only Jewish officer. The following year, he transferred to Army Intelligence.

In 1890, Dreyfus married Lucie Hadamard, an accomplished pianist and a young woman with a more traditional Jewish background than he, observing Jewish Holy Days and her biblical study. She was unshakably loyal to her husband throughout the Affair and in later life, devoted much of her time to Jewish causes. Their son Pierre was born in 1891 and daughter Jeanne in 1893.

While Alfred Dreyfus was a captain in the French army, he was found to have a letter meant for the German army, selling French secrets to them. On 10/15/1894, he was arrested on grounds of high treason. He was court-martialed and was convicted on 12/22/1894, stripped of his rank, publicly degraded and deported to the penal colony of Devil's Island to serve a sentence of life imprisonment in total isolation and under inhumane conditions. He arrived on the island on 4/13/1895.

The French soon forgot the case; however, his family protested the decision and was determined to bring about a revision of the trial by working to find evidence pointing to the real traitor. This case greatly changed France and divided the country into two sides. Public sentiment ran high, an outraged cry for justice versus rampant anti-Semitic riots in which Jews were stoned and effigies burned.

On 11/25/1897, Emile Zola published his first article in support of Dreyfus. For his defense of the young Captain, Zola was tried and given a year in jail; he fled to England. During the Affair, public figures resigned; there were suicides and assassinations and many careers were ruined as new evidence came out.

A few years later, Alfred's brother, who worked ceaselessly for his freedom, compared the letter to the handwriting of another army officer, Comte. Esterhazy and found that the two matched. He made this new information known, and years later Dreyfus was exonerated. He had been framed because it was actually some higher army officers who had written the letter and needed someone to blame. Finally, a retrial was ordered on 6/03/1899 by the United Court of Appeals, revoking the 1894 verdict. During the Rennes trial, August 7 to September 9, Dreyfus was declared guilty again and condemned to public degradation and another ten years imprisonment.

Polish and Russian pogroms continued, heralding, in 1902, widespread massacres of Jewish communities, and on September 2, Zola died mysteriously at home from asphyxiation.

On 4/04/1903, Jean Jaurès demanded in the Chamber of Deputies a revision of the Rennes verdict, but it was another long three years – 7/12/1906 – before the Supreme Court of Appeal in Paris annulled the Rennes verdict and declared Dreyfus innocent of all the charges against him.

On 7/13/1902, Parliament voted to reinstate Dreyfus into the Army and a week later he was awarded the Legion of Honour at public ceremony.

His name was finally cleared.