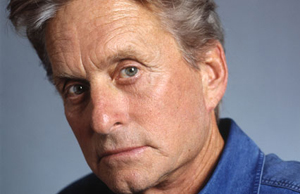 Michael Kirk Douglas (born September 25, 1944) is an Oscar-winning and Emmy Award-nominated American actor and producer, primarily on movies and television, who arose to fame as Karl Malden's young partner, Insp. Steve Keller in the popular 1970s crime drama, The Streets of San Francisco.

Early life
Douglas was born in New Brunswick, New Jersey to celebrated American actor Kirk Douglas and Bermudian actress Diana Dill. His paternal grandparents, Herschel Danielovitch and Bryna Sanglel, were Jewish immigrants from Russia, while his mother and maternal grandparents, Lt. Col. Thomas Melville Dill and Ruth Rapalje Neilson, were natives of Devonshire, Bermuda; his maternal grandfather served as the Attorney General of Bermuda and was a commanding officer of the Bermuda Militia Artillery. Douglas graduated from the prestigious Eaglebrook School in Deerfield, Massachusetts before going on to Choate Rosemary Hall in Wallingford, Connecticut, which is the same school Glenn Close attended. Douglas graduated from the University of California, Santa Barbara in 1968 with a B.A. in dramatic arts where he is also the Honorary President of the UCSB Alumni Association.

Career
Having a famous father opened many doors to Michael that would have been closed to other young Hollywood hopefuls. Douglas starred in the long-running TV series The Streets of San Francisco from 1972 to 1976. He received an Academy Award as producer for One Flew Over the Cuckoo's Nest in 1975. Although Douglas was a capable actor on Streets, his career was somewhat stagnant after the series, an he only appeared in occasional movies which were usually less than popular (e.g., 1979's Running).

Douglas as Gordon Gekko in Wall StreetHis fortunes changed when he starred in the 1984 romantic adventure comedy Romancing the Stone. The film was followed a year later in 1985 by a sequel, The Jewel of the Nile. In 1987, Douglas starred playing in Fatal Attraction with Glenn Close and the film became a world-wide hit. In 1988, Douglas received another Academy Award, this time for acting in the leading role of Wall Street which would lead to many roles playing characters much like Gordon Gekko. Douglas later starred as Mister Rose a successful lawyer similar to this character's personality in The War of the Roses, which featured previous co-stars Kathleen Turner and Danny DeVito.

In 1992, Douglas revived his slick, worldly character when he appeared alongside Sharon Stone in the film Basic Instinct. The movie was a huge hit, and sparked controversy over its depictions of bisexuality and lesbianism. In 1998, Douglas received the Crystal Globe award for outstanding artistic contribution to world cinema at the Karlovy Vary International Film Festival.

Douglas' skill at character acting continued to make him one of the most sought-after actors in Hollywood and commands a hefty sum for his roles. After the commercial failure of It Runs in the Family (2003), Douglas did not star in a movie for three years, until The Sentinel in 2006. A year prior to the release of It Runs in the Family, he guest-appeared on an episode of the popular television sitcom Will and Grace, as his familiar visage but as a gay cop attracted to Will Truman (Eric McCormack); the performance earned Douglas an Emmy Award nomination for Outstanding Guest Actor in a Comedy Show. His Fatal Attraction co-star, Glenn Close, appeared in the following episode of the series and also earned an Emmy nomination for her performance.

Douglas on being asked to do Basic Instinct 2: "Yes, they asked me to do it a while ago, I thought we had done it very effectively; (Paul) Verhoeven is a pretty good director. I haven't seen the sequel. I've only done one sequel in my life, The Jewel of the Nile, from Romancing The Stone. Besides, there were age issues, you know? Sharon still looks fabulous. The script was pretty good. Good for her, she's in her mid-40s and there are not a lot of parts around. The first one was probably the best picture of her career—it certainly made her career and she was great in it."

Michael Douglas after his visit aboard a P-3C Orion, at Naval Air Station Sigonella, Sicily, June 19, 2004.Douglas married Diandra Luker on March 20, 1977. They had one son, Cameron (born December 13, 1978). In 1980, Douglas was involved in a serious skiing accident which sidelined his acting career for three years. In September of 1992, he underwent treatment for alcohol abuse at Sierra Tucson Center. In 2000, after 23 years of marriage, Diandra divorced Douglas. Douglas married Welsh actress Catherine Zeta-Jones on November 18, 2000; they were both born on September 25. They have two children, Dylan Michael (born August 8, 2000) and Carys Zeta (born April 20, 2003).

Douglas and Zeta-Jones hosted the annual Nobel Peace Prize concert in Oslo, Norway on December 11, 2003. They acted as co-masters of ceremony in the concert celebrating the award given to Shirin Ebadi. In 2006, he was awarded an honorary Doctor of Letters (D.Litt.) from the University of St. Andrews. Douglas and his family divide their time between their homes in Pacific Palisades, California, New York City, Aspen, Colorado, Bermuda, Majorca and Swansea.

Douglas is an advocate of nuclear disarmament, is a supporter of the Nuclear Age Peace Foundation and sits on the Board of Directors of the Ploughshares Fund. In 1998 he was appointed UN Messenger of Peace by Secretary-General Kofi Annan. He is a notable Democrat and has donated money mainly to Democratic candidates.

In 1997, New York caddy, James Parker, sued Douglas for USD$25 million. Parker accused Douglas of hitting him in the groin with an errant golf ball, causing Parker to lose a testicle and his job. The case was later settled out of court.