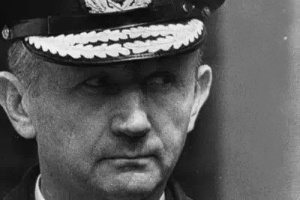 Commander of the U-boat fleet, Supreme Naval Commander, and finally Hitler's successor in the last days of the Third Reich. Grand Admiral Karl Doenitz has been condemned as a Nazi and praised as one of the most brilliant and honorable military leaders of the war. His "wolf-pack" tactics resulted in a handful of U-boats sinking 14.5 million tons and nearly deciding the Battle of the Atlantic.

During WW I, Doenitz served in U-boats and remained in the German Navy, although the Versailles Treaty would not allow Germany to keep any submarines. Doenitz secretly planned a German submarine fleet in the years following the Treaty of Versailles and was given command of submarine operations by Adolf Hitler in 1935. When Germany began to rearm, Doenitz was chosen to organize the new submarine service, and became Chief of U-boat Forces.

When war broke out in 1939, he was promoted to Rear Admiral, but had far fewer submarines than were required by the war plans (which did not expect a war to start before 1942). In spite of this, Doenitz' U-boats were highly successful, scoring one coup after another, while the warships of the German surface navy, like the Bismark or Graf Spee, seemed to make headlines only by being hunted down and sunk. Hitler was highly impressed by Doenitz' talent, and on 1/30/1943, appointed him Grand Admiral, succeeding Raeder as Commander-in-Chief of the German Navy while retaining his command of the U-boat arm. Then, on 5/01/1945, he succeeded Hitler as leader of Germany.

After the surrender, Doenitz was tried for War Crimes at Nuremburg. He succeeded in convincing the tribunal that he had been kept ignorant of the murder of millions in the Concentration Camps and Death Camps of "the final solution," but was sentenced to ten years, 1946-1956, for "Planning Agressive War."

His memoirs appeared in 1958 and were translated from German the following year.