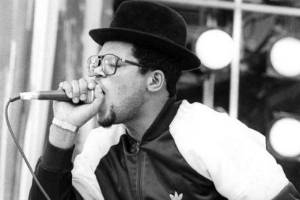 American rapper of Run DMC, a group that is given credit for bringing hip-hop music to mass audiences in the 1980s. The group was the first rap act to be on the top 10 and was the first featured on MTV music channel. The group had its first hit, "It's Like That," in 1983. in 1985 "Raising Hell" became the first rap album to go platinum. By 1990, the group had all but vanished from the music scene though they released another album in 2001. It did not stimulate a comeback, however,

On October 30, 2002 at about 7:30 PM local time, a member of the group was shot dead by a gunman in a Queens, NY recording studio, and another member was seriously wounded. The incident sent the rapper into deep depression which he tried to alleviate by writing his autobiography. That attempt sent him on a four-month search for his birth mother which was recorded, documentary-style and aired on February 25, 2006 on cable TV. His first ever solo album, "Checks Thugs and Rock ‘n Roll" was released on March 14. on being adopted, he said, "He says, "At first, I was gonna get really sad about it. But then I said, 'If my (birth) mother never gave me up, my mother would have never came and got me, I would have never moved to Hollis (Queens, New York), I would have never met JOE ('RUN' SIMMONS), we would have never formed Run-DMC and none of this rap s**t would have jumped off. I'm gonna write a record that's gonna help kids in the foster homes, or that are lookin' to adopt a kid."