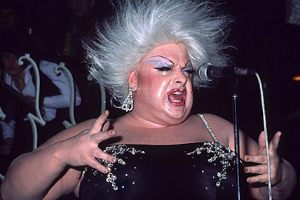 American actor and singer, the Drag Queen of the Century, a 375 lbs. transvestite whose greatest spoof was his own character, "Divine." He was not afraid to portray a profane, obscene, up-yours, decadent, fat and grotesque titan of bad taste who became one of the major cult favorites of his day.

Glenn grew up in a big old Victorian house on a charming 30-acre estate in suburban Baltimore. His parents ran a nursery school and were pillars of the community, but it soon became apparent that there was something odd about their boy. Every day after school, the overweight kid would dress up in his mom’s clothes and go prancing happily about the house. School itself was a nightmare. The other kids saw him as being effeminate and beat up the "fat Nellie queer." It got so bad that he was transferred to a girls' gym class and ferried to school in a police car.

At 16, when he had lost 80 lbs. and colored his hair red, he met an equally bizarre teenager named John Waters, who lived just down the street. The two remained friends into their Hollywood days, each achieving their own notoriety, John as a film maker and Glenn as his own alter ego, "Divine." In high school, Glenn was interested in horticulture, cosmetology and acting.

After graduating, he worked for five or six years as a hairdresser, eventually running his own salon, a gift from his generous parents. In May 1971, Glenn had an argument with his parents which resulted in a ten-year separation without contact. He moved to San Francisco and they, to Miami. They were repulsed by his lifestyle and appalled by his films.

Glenn did play a few roles out of drag and even had a brief career as a disco diva recording star and club attraction. The videotape, "Divine Live at the Hacienda," captures one of his many club appearances, this one at the famous Manchester, UK club, Hacienda, on 2/16/1983. The songs he performed included "Jungle Jezebel," "Born To Be Cheap," and "Shake it Up," among other comedy renditions.

Due to his weight, Divine had a plethora of problems with his body including a sleeping disorder, sleep apnea, in which chronic violent snoring results in memory loss, mood swings, heart attacks and strokes. His weight, among other problems, including depression about every aspect of his life, led him through down cycles of bitterness. He was also reportedly addicted to marijuana and would often pass out where he sat, exhausted from pot and chronic insomnia.

In person, Divine was said to be quite different from his wild screen persona, soft-spoken and businesslike, faintly grand and not particularly funny, low-key and pleasant.

At age 42, he was just about to branch into television when he met his demise in Southern California. He'd broken his habit of pot smoking, been widely praised by fans and the press for his role as Edna Turnblad in John Waters' "Hairspray," and was finally going to play a role out of drag on network television. The Fox program, "Married … With Children," had booked him to play a Bundy relative, Uncle Otto - a character Fox hoped would become a regular. The morning of his debut shoot, he did not show up on the set. His personal manager, Bernard Jay, discovered him dead in his hotel suite the morning of 3/07/1988, a smile on his face, dead from an enlarged heart and his weight.

His biography, by Bernard Jay, is called "Not Simply Divine."

In 2001 he was resurrected for fans of the bizarre in a re-release of a film that had been sitting in Water’s attic for years, "Female Trouble." Water’s favorite 1974 tasteless comedy surfaced on DVD for the first time ever in October. It is the story of Dan Davenport (played the late drag queen Divine), who becomes a mass murderer because her parents don't give her the cha-cha heels she wanted for Christmas.