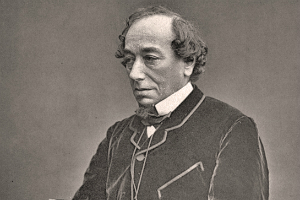 British politician, the Prime Minister in 1868, the only man with a Jewish heritage who ever held that post. His political essays and novels earned him a permanent place in English literature. But Disraeli was also interested in politics and after being elected to Parliament in 1837, he developed into an outstanding, realistic, and caustically witty politician. His policy of democracy and imperialism revitalized his party and in 1848 he became leader of the Tory protectionists.

His father, the writer Isaac D’Israeli, was the author of several books on literature and history. When the boy was 13, his dad had a disagreement with his synagogue and converted the entire family to Christianity. From the ages 17 to 20 he was a law apprentice. After a private, fine education Disraeli was trained as a solicitor. Like his father, Benjamin took a keen interest in literature. His first novel, "Vivian Grey" was published in 1826. The book sold very well and was followed by another five books in the following decade.

In 1830 he traveled to Spain, the Balkans, Turkey and the Middle East. From 1832 to1835 he tried four times to get into parliament, first as a Radical and then three times as a Tory. It was not the party to which he was committed but the drive to gain a voice of power. Even with the four defeats he became well known. The reason for this was the pamphlets he issued and the letters he wrote to the London Times where he complained about the failure of the church and state to fulfill their duty of improving the working and living conditions of the majority of people.

He eventually won a seat in the House of Commons in the election of 1837. He nearly ruined his career when he made his maiden speech in December 1837 on the subject of Irish elections. The other politicians laughed at him because of the way he spoke and the way he was dressed and he was shouted down by fellow MPs. He ended his speech with the words, "I sit down now but the time will come when you will hear me." His second speech that month, which was dull, was more successful. He was always eccentric, extreme in dress and manner and exaggerated in speech.

In 1839 Disraeli married the extremely wealthy widow, Mrs. Mary Anne Wyndham Lewis, 12 years his senior. The marriage was a great success. On one occasion Disraeli remarked that he had married for money, and his wife replied, "Ah! but if you had to do it again, you would do it for love." In December 1868, Disraeli asked the Queen to give a peerage to his wife and Mary-Anne was created Viscountess Beaconsfield. In 1872, Mary-Anne died.

In 1847 Disraeli supported Lord John Russell in lifting the ban on people of the Jewish religion being a Member of Parliament.

Disraeli favored a political partnership with the working classes, and as chancellor of the exchequer (1852, 1858-59, 1866-68), he educated his party (now the Conservative party) to pass the fairly radical Reform Bill of 1867, which enfranchised some two million men, largely of the working class, and greatly benefited his party.

He became prime minister in 1868 but lost the office to William Gladstone that same year. His second ministry (1874-80) produced many domestic reforms but is noted for its aggressive foreign policy. The annexation of the Fiji islands (1874) and the Transvaal (1877), and the wars against the Afghans (1878-79) and the ZULUS (1879), proclaimed England an imperial world power.

Unlike William Gladstone, Disraeli got on very well with Queen Victoria. She approved of Disraeli's imperialist views and his desire to make Britain the most powerful nation in the world. In 1876 Victoria agreed to his suggestion that she should accept the title of Empress of India. In August 1876 Queen Victoria granted Disraeli the title Lord Beaconsfield. Disraeli left the House of Commons but continued as Prime Minister and now used the House of Lords to explain his government's policies. At the Congress of Berlin in 1878 Disraeli gained great acclaim for his success in limiting Russia's power in the Balkans.

The Liberals defeated the Conservatives in the 1880 General Election and after William Gladstone became Prime Minister, Disraeli decided to retire from politics. He hoped to spend his retirement writing novels but soon after the publication of "Endymion," 1880, he became very ill.

Benjamin Disraeli, 1st Earl of Beaconsfield 1804-81, British statesman and author, died on 4/19/1881, London. The Queen was prevented by protocol from attending his funeral but she visited his grave later and had a monument to him erected in Hughenden Church.