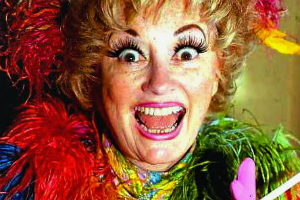 Diller was born Phyllis Ada Driver in Lima, Ohio on July 17, 1917, the only child of Frances Ada (née Romshe; January 12, 1881 – January 26, 1949) and Perry Marcus Driver (June 13, 1862 – August 12, 1948), an insurance agent. She had German and Irish ancestry (the surname "Driver" had been changed from "Treiber" several generations earlier). She was raised Methodist. She attended Lima's Central High School, then studied piano for three years at the Sherwood Music Conservatory of Columbia College Chicago before transferring to Bluffton College, where she met fellow "Lima-ite" and classmate Hugh Downs.

Diller was a housewife, mother, and advertising copywriter. During World War II, she lived in Ypsilanti, Michigan while her husband worked at the Willow Run Bomber Plant. In the mid-1950s, she made appearances on The Jack Paar Show and was a contestant on Groucho Marx's quiz show You Bet Your Life.

Although she made her career in comedy, Diller had studied the piano for many years. She decided against a career in music after hearing her teachers and mentors play with much more skill than she thought that she would be able to achieve. She still played in her private life, however, and owned a custom-made harpsichord.

Along with Lenny Bruce, Bob Newhart, and Mort Sahl, Diller was part of the so-called "New Wave" comedians who began their careers after WWII and had no connections to vaudeville.

Diller began her career working at KROW radio in Oakland, California in 1952. In November of that year, she began filming a television show titled Phyllis Dillis, the Homely Friendmaker. The 15-minute series was a Bay Area Radio-Television production, directed for television by ABC's Jim Baker. In the mid-1950s, while residing in the East Bay city of Alameda, California, Diller was employed at KSFO radio in San Francisco. Bill Anderson wrote and produced a television show at KGO-TV called Pop Club, which was hosted by Don Sherwood. Pop Club was a live half-hour show that combined playing records with "experts" rating them, and dancing girls encouraging audience participation. The show was an early advertisement for Belfast Root Beer, the show's main sponsor, later known as Mug Root Beer. Anderson invited her onto his show on April 23, 1955, as a vocalist.

Diller first appeared as a stand-up at The Purple Onion on March 7, 1955, and remained there for 87 straight weeks. She appeared on Del Courtney's Showcase on KPIX-TV on November 3, 1956. After moving to Webster Groves, in St. Louis, in 1961, Diller honed her act in St. Louis clubs such as Gaslight Square's Crystal Palace. By the mid-1960s, St. Louis was home to her.

Diller became most famous for her movie and TV appearances with Bob Hope during the 1960s: Boy, Did I Get a Wrong Number!, Eight on the Lam, and The Private Navy of Sgt. O'Farrell. Although all these films were critically panned, Boy, Did I Get a Wrong Number! did well at the box office and Diller accompanied Hope to Vietnam in 1966 with his USO troupe during the height of the Vietnam War.

Throughout the 1960s, she appeared regularly as a special guest on many television programs. For example, she appeared as one of the What's My Line? Mystery Guests. The blindfolded panel on that evening's broadcast included Sammy Davis, Jr., and they were able to discern Diller's identity in just three guesses. Also, Diller made regular cameo appearances making her trademark wisecracks on Rowan and Martin's Laugh-In. Self-deprecating to a fault, a typical Diller joke had her running after a garbage truck pulling away from her curb. "Am I too late for the trash?" she'd yell. The driver's reply: "No, jump right in!"

Though her main claim to fame was her stand-up comedy act, Diller also appeared in other films including a cameo appearance as Texas Guinan, the wisecracking nightclub hostess in the 1961 film Splendor in the Grass. She appeared in more than a dozen, usually low-budget, movies. She provided the voice of The Monster's Mate in the Rankin/Bass animated film Mad Monster Party (1967) co-starring Boris Karloff.

Diller also starred in two short-lived TV series: The Pruitts of Southampton (1966–1967); later retitled The Phyllis Diller Show, a half-hour sitcom on ABC; and The Beautiful Phyllis Diller Show (1968), a variety show on NBC. Subsequent TV appearances included at least three episodes between 1999 and 2003 on the long-running family drama 7th Heaven, in one of which she got drunk while cooking dinner for the household; and a 2002 episode of The Drew Carey Show  as Mimi Bobek's grandmother. She posed for Playboy, but the photos were never run in the magazine. Her voice can be heard in several animated TV shows including The New Scooby-Doo Movies (1972) as herself, Hey Arnold! as Arnold's grandpa's sister Mitzi, The Adventures of Jimmy Neutron: Boy Genius (2002) as Jimmy's grandmother, and on Family Guy in 2006 as Peter Griffin's mother, Thelma Griffin.

Beginning December 26, 1969, she had a three-month run on Broadway in Hello, Dolly! (opposite Richard Deacon) as the second to last in a succession of replacements for Carol Channing in the title role, which included Ginger Rogers, Martha Raye, Betty Grable, and Pearl Bailey. After Diller's stint, Ethel Merman took over the role until the end of the show's run in December 1970.

In 1993, Diller was inducted into the St. Louis Walk of Fame.

In 1998, Diller provided the voice of the Queen in Disney/Pixar's animated movie A Bug's Life. Among her other animated movies were The Nutcracker Prince (1990, as Mouse­queen), Happily Ever After: Fairy Tales for Every Child (1990, as Mother Nature) and Casper's Scare School (2006, as Aunt Spitzy). Diller guested as her­self in "A Good Medium is Rare", a 1972 episode of The New Scooby-Doo Movies. Other television shows for which she voiced characters include Robot Chicken, Family Guy, Jimmy Neutron, Wait Till Your Father Gets Home, Captain Planet, Cow and Chicken, Hey Arnold!, The Powerpuff Girls, Animaniacs, The Wild Thornberrys and King of the Hill.

In 2005, Diller was featured as one of many contemporary comics in The Aristocrats. Diller, who avoided blue comedy, did a version of an old, risqué vaudeville routine in which she describes herself passing out when she first heard the joke, forgetting the actual content of the joke.

In 2000, she was awarded the Women in Film Lucy Award, recognizing her achievements in enhancing the perception of women through the medium of television

In 2003, after hearing of the donation of Archie Bunker's chair to the Smithsonian Institution, Diller opened her doors to the National Museum of American History. She offered up some of her most iconic costume pieces, as well as her gag file, a steel cabinet with 48 file-drawers with more than 50,000 jokes she had recorded on index cards during her career. From August 12 to October 28, 2011, the Albert H. Small Documents Gallery at the National Museum of American History displayed Diller's gag file and some of the objects that became synonymous with her comedic persona—an unkempt wig, wrist-length gloves, cloth-covered ankle boots and a bejeweled cigarette holder.

On January 24, 2007, Diller appeared on The Tonight Show and performed stand-up before chatting with Jay Leno.

On April 10, 2007, she had a cameo appearance in an episode of Boston Legal. Playing herself, she confronted William Shatner's character Denny Crane and alleged they'd had a torrid love affair.

Diller was a member of the Society of Singers, which supports singers in need. In June 2001 at the request of fellow Society member and producer Scott Sherman, she appeared at Kansas City and Philadelphia Pride events. The mayor of Philadelphia officially proclaimed June 8, 2001, as "Phyllis Diller Day." She was presented an official proclamation onstage to a standing ovation. In 2006, Mayor of San Francisco Gavin Newsom proclaimed February 5, 2006, "Phyllis Diller Day in San Francisco", which she accepted by phone.

She also recorded at least five comedy LP records, one of which was Born To Sing, released as Columbia CS 9523.

Between 1971 and 1981 she appeared as a piano soloist with some 100 symphony orchestras across the country under the stage name Dame Illya Dillya. Her performances were spiced with humor, but she took the music seriously. A review of one of her concerts in The San Francisco Examiner called her "a fine concert pianist with a firm touch."

In 2011, she appeared in an episode of her friend Roseanne Barr's reality show Roseanne's Nuts.

The October 7, 2012 episode of Family Guy, "Ratings Guy," was dedicated to the memory of Diller and Michael Clarke Duncan.

Diller, a longtime resident of the Brentwood area of Los Angeles, California, credited much of her success to Bob Hope, in large part because he included her in many of his movies and his Vietnam USO shows. She was an accomplished pianist and a painter.

Diller credited much of her success to a motivational book, The Magic of Believing (1948) by Claude M Bristol, which gave her confidence at the start of her career. The book was also an inspiration for her friend, Liberace.

Diller was married and divorced twice. She also dated Earl "Madman" Muntz, a pioneer in oddball TV and radio ads.

She had six children from her marriage to her first husband, Sherwood Anderson Diller. Her first child was Peter (born September 1940; died 1998 of cancer). Her second child Sally, born in November 1944, has suffered from schizophrenia most of her life. Her third child (born 1945), a son, lived for only two weeks in an incubator. A daughter, Suzanne, was born in March, 1946, followed by another daughter Stephanie (born October 1948, died 2002 of a stroke) and a son Perry (born February 1950).

Diller's second husband was actor Warde Donovan (born Warde Tatum), whom she married on October 7, 1965. She filed for divorce three months later, having found him to be bisexual and alcoholic, though they reconciled on the day before the divorce was to have become final. Their marriage continued until she divorced Donovan in 1975.

"Fang", the husband Diller frequently mentioned in her act, was entirely fictional and not based on either of her actual husbands.

She candidly discussed her plastic surgery, a series of procedures first undertaken when she was 55. In her 2005 autobiography, she wrote that she had undergone "fifteen different procedures". Her numerous surgeries were the subject of a 20/20 segment February 12, 1993.

Diller penned her autobiography in 2005, titled Like a Lampshade in a Whorehouse. A direct-to-DVD version of the project, complete with early live clips of Diller, and interviews with her showbiz colleagues including Don Rickles, among others, was released in December 2006. Diller spent much of her final years painting, cooking, and gardening.

Diller began to suffer from various ailments as she passed her 80th birthday. In 1999, she suffered a heart attack and after a hospital stay she was fitted with a pacemaker and released. A bad fall resulted in her being hospitalized for neurological tests and pacemaker replacement in 2005. Approaching 90, she retired from stand-up comedy appearances.

On July 11, 2007, USA Today reported that she had fractured her back and had to cancel a Tonight Show appearance, during which she had planned to celebrate her 90th birthday. On January 4, 2011, she made one of her final public appearances on CNN's Anderson Cooper 360° as part of a panel of comedians.

On the morning of August 20, 2012, Diller died from natural causes in her Brentwood, Los Angeles, California home at the age of 95, with "a smile on her face" according to her family.