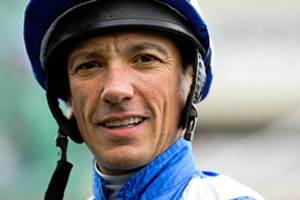 Lanfranco "Frankie" Dettori, MBE (born 15 December 1970) is an Italian horse racing jockey and celebrity. Dettori has been Champion Jockey on three occasions and has ridden the winners of more than 500 Group races. His most celebrated achievement was riding all seven winners on British Champions' Day at Ascot in 1996. He is the son of the jockey Gianfranco Dettori, who was a prolific winner in Italy. He has been described by Lester Piggott as the best jockey currently riding.

Since the end of 2012, Dettori has been operating as a freelance, having split with Godolphin Racing, for whom he was stable jockey and had most of his big race victories. On 5 December 2012, he was suspended from riding for six months after being found guilty of taking a prohibited substance, believed to be cocaine. During this absence, he took part in the 11th series of the UK reality TV show Celebrity Big Brother finishing seventh on Day 21.

Born in Milan, Dettori's first experience with horses was at the age of twelve and his father bought him a Palomino pony. This had some impact on him, as he rode the horse often. When he was 13 Dettori left school to become a stable boy and apprentice jockey. The following year he went to Great Britain where he apprenticed with trainer Luca Cumani at Newmarket in 1985 and became a stable jockey soon after.

In 1990 Dettori became the first teenager since Lester Piggott to ride 100 winners in one season. His first win came at the age of 16 in Turin in November 1986, while his first victory in Britain was the following June. Further success followed, with numerous winners in Group 1 races. On 28 September 1996 he achieved the feat of winning all seven races on a single day at Ascot Racecourse.

In an interview with the BBC's Newsnight, he admitted that he used to take diuretic drugs to keep his weight down. Dettori said he had used a wide range of substances before the Jockey Club banned them in June 1998 after a spate of positive drug tests revealed how prevalent their use was becoming: "I took Lasix, pee pills, diuretics, laxatives; all sorts."

Dettori is the retained jockey for the Godolphin racing stables, but it was announced in September, 2012, that the retainer would not be renewed in 2013. He is well known for his distinctive "flying dismounts".

He quit his position as a team captain on the BBC quiz A Question of Sport in 2003, when he was apparently stung by a question from a participant as to when he retired from riding. Since that time he has completely rededicated himself to riding. He was rewarded for his newfound dedication by becoming the British Champion Jockey in 2004.

The Epsom Derby was the only British Classic Race Dettori had not won in his career, until his fifteenth attempt on 2 June 2007 on the Peter Chapple-Hyam trained Authorized. The following day he won the Prix du Jockey Club on Lawman, notching up a derby double.

In 2007 Dettori became the face of "Jockey" yoghurt, sold across Europe, but especially popular in France. Controversial at first for its sweet flavour, Dettori's advertising campaign: "Frankie know whatta you alike!" – has seen sales rise slightly.

In November 2012, he faced an inquiry following a failed drugs test while riding in France in September.

On 5 December 2012, Dettori was suspended from riding for six months after being found guilty of taking a prohibited substance  believed to be cocaine. In a statement, his lawyer said he "also accepts that he has let down the sport he loves and all those associated with it, as well as the wider public".

In January 2013, Dettori was the fifth to be evicted on the eleventh series of the British reality show, Celebrity Big Brother.

After serving his six month ban, Dettori made his racing comeback at Epsom on the May 31, 2013. A week later, he won his first race riding Asian Trader at Sandown.

On 31 June 2013 Dettori signed a deal that makes him the retained rider for Sheikh Joaan Al Thani.

Like many other jockeys and trainers Dettori lives in Stetchworth near to Newmarket, Suffolk with his wife Catherine and their five children: Leo; Ella; Mia; Tallula; and Rocco.

An ardent Anglophile, he thrives on English culture: Dettori is an avid Arsenal supporter. He has a line of frozen Italian food. In 2004, he opened a restaurant, Frankie's Bar and Grill in Putney, London with renowned chef Marco Pierre White.

In 2000, Dettori and Ray Cochrane were aboard a Piper Seneca plane which crashed on take off at Newmarket on its way to Goodwood in Sussex, killing the pilot. Dettori escaped with a fractured right ankle and an injured thumb, and spent some weeks in Addenbrooke's Hospital.

Thieves stole many of his medals from his home on the evening of 25 August 2006. Items missing include three Gold Cups awarded in Japan, and his MBE.