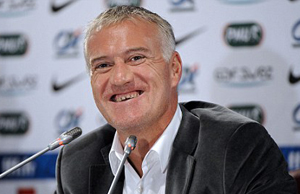 He played as a defensive midfielder. As an international, he assisted France with victories in the 1998 World Cup and Euro 2000. Deschamps captained France to victory in the 1998 World Cup final against Brazil. After a short passage at rugby in the Biarritz Olympique Deschamps started his football career at an amateur club, Aviron Bayonnais whilst still at school.

His potential was spotted by scouts from Nantes, for whom he signed in April 1983. Deschamps made his league debut on 27 September 1985. Transferred to Marseille in 1989, Deschamps spent a season with Bordeaux in 1990 before returning to Marseille. In this second spell with Marseille Deschamps gained his first honours.

Receiving his first international call-up from Michel Platini on 29 April 1989 against Yugoslavia, Deschamps started his international career in what was a dark time for the French team as they failed to qualify for the World Cup in both 1990 and 1994. When new team coach Aimé Jacquet began to rebuild the team for Euro 1996, he initially selected Eric Cantona as captain.

After Cantona earned a year-long suspension in January 1995, the make-up of the team changed dramatically, with veterans Cantona, Jean-Pierre Papin, and David Ginola being dropped in favour of younger players such as Zinedine Zidane. Deschamps, as one of the few remaining veterans, was chosen to lead what would later be called the "Golden Generation".

He first captained France in 1996 in a friendly match against Germany as a warmup for Euro 96. During that tournament, held in England, he led them all the way to the semi-finals, their best finish in an international tournament since the 1986 World Cup. In 1998, Deschamps captained France as they won 1998 World Cup on home soil in Paris, holding an integral role in the team.

After a short passage at rugby in the Biarritz Olympique Deschamps started his football career at an amateur club. As well as winning two French league titles in 1991 and 1992, Deschamps was part of the Marseille team which became the first (and so far only) French winners of the Champions League in 1993.

He finished his playing career in Spain, spending a season with Valencia, helping them to the 2001 UEFA Champions League Final, but he remained on the bench as they lost to Bayern Munich. He then retired in summer 2001, when he was only 32 years old.
International career

Deschamps started his international career in what was a dark time for the French team as they failed to qualify for the World Cup in both 1990 and 1994. Propelled by the momentum of this triumph, Deschamps also captained France as they won Euro 2000, giving them the distinction of being the first national team to hold both the World Cup and Euro titles since West Germany did so in 1974.

France held the top position in the FIFA World Rankings system from 2001–02. Following the tournament Deschamps announced his retirement from international football, making his second last appearance in a ceremonial match against a FIFA XI in August 2000, which resulted in 5–1 victory.

His final appearance was against England. At the time of his retirement Deschamps held the record for the most appearances for France, though this has since been surpassed by his close friend Marcel Desailly, Zinedine Zidane, Lilian Thuram and Thierry Henry. In total, Deschamps earned 103 caps and scored four goals.

Deschamps was named by Pelé as one of the top 125 greatest living footballers in March 2004. Deschamps was once derisively described by Cantona as "the water-carrier" by which Cantona meant that Deschamps only existed to pass the ball to "more talented" players.
Managerial career
Monaco

After retiring as a player, he went into football management. He was the head coach of Monaco in France's Ligue 1, leading Monaco to the Coupe de la Ligue title in 2003 and to its first UEFA Champions League final in 2004. He resigned on 19 September 2005 after a poor start to the season, and disagreement with club's president.
Juventus

On 10 July 2006, Deschamps was named head coach of Juventus. The club had just been relegated to Serie B after the 2006 Italian football scandal. Deschamps' first game in charge of Juventus was highly successful when Juventus beat Alessandria 8–0. But poor results followed after Juventus was knocked out in the 3rd round of the Coppa Italia and the 1–1 draw at Rimini on the first day of the league season. But the following 3 games in which Juventus beat Vicenza 2–1, Crotone 0–3, and Modena 4–0 made it look like Deschamps had everything under control. Also, Deschamps helped Juventus to win their first competition since being relegated; due to the match fixing scandal which was the Birra Moretti Cup in which Juventus beat Internazionale 1–0 and Napoli in a penalty shoot out. He led Juventus to its return to Serie A, which was confirmed on 19 May 2007 with a 5–1 away win at Arezzo. On 26 May, several media announced Deschamps had resigned as Juventus manager, following several clashes with the club management. This was however denied by Juventus itself a few hours later. Later that evening after the game against Mantova which confirmed Juve as Serie B champions, Deschamps confirmed to the media that he had indeed resigned. The news was then made official by Juventus a few hours later.
Marseille

On 5 May 2009, it was announced that Deschamps would be named manager of Marseille to the upcoming season which began on 1 July 2009. In his first season, he managed them to their first Ligue 1 title in 18 years. His success had seen the Marseille manager linked to a return to Juventus where former president Giovanni Cobolli Gigli urged the club to bring back Deschamps to replace Ciro Ferrara. Ferrara was eventually replaced by Alberto Zaccheroni. On 29 June 2010, Deschamps signed a contract extension that will keep him at Marseille until June 2012. On 6 June 2011, he extended his contract again, this time until June 2014. On 13 March 2012, his Marseille side progressed to the Champions League quarter-finals for the first time since 1993 by beating Inter Milan. On 14 April 2012, Olympique de Marseille won the Coupe de la Ligue for third time in a row after they beat Lyon 1–0 with Brandão scoring in extra-time. The victory also ended a winless run of 12 matches in all competitions. Deschamps was delighted with Marseille's Coupe de la Ligue triumph and added: "All title wins are beautiful, as they are difficult to achieve. This is the sixth in three years. For a club that had not won anything for 17 years, it is something to be proud of. The credit goes mostly to the players, but I also want to associate my staff with the victory. This is a great source of pride for me, even if it does not change the fact it has been a difficult season in Ligue 1." On 2 July 2012, Deschamps has left club by mutual agreement citing their poor finsh of 10th place in 2011–12
France

Deschamps was appointed as head coach of the France national football team on 8 July 2012, following in the footsteps of Laurent Blanc, who resigned after the UEFA Euro 2012 tournament.