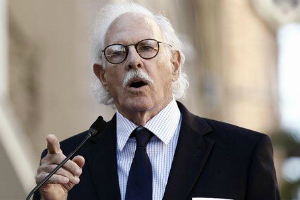 American actor working in films since 1960, often playing the roles of unstable, psychotic or fanatic characters.

His grandfather was the former governor of Utah and FDR's Secretary of War. His father, John Dern, was the law partner of Adlai Stevenson. Dern's mother, Jean was the granddaughter of the Carson, Pirie, Scott department store's co-founder. Born into a distinguished family in Winnetka, Illinois, Dern resented the time his parents abandoned him to his governess' care. He felt an empty childhood as his parents traveled and when at home, they drank heavily. He went to private schools and ended up a track star at New Trier High School in Chicago. He went to the University of Pennsylvania and majored in journalism. He tried out for the 1956 Olympic track team but failed to qualify. He became disillusioned with his major so he dropped out of college to take up an acting career. Inspired by the image of Marlon Brando and James Dean, Dern hoped to make an impression in New York. He married Marie Pierce and moved to New York City to study at the Actor's Studio. Dern's family strongly disapproved of his career and almost disowned the young actor. In 1959, Dern was in the play, "Sweet Bird of Youth" on Broadway and he made his film debut in "Wild River" in 1960.

From 1960, Dern continued to earn roles in film and television usually playing a misfit character. To this day, it is hard for John Wayne fans to forgive Dern's character for killing their hero in the film, "The Cowboys," 1972. He played in "The Incredible Two-Headed Transplant," 1967, "Black Sunday" 1977 and "Coming Home" 1980 in which his performance earned him an Academy Award nomination for Best Supporting Actor.

After the failure of his first marriage, Dern met actress Diane Ladd in an off- Broadway production of "Orpheus Descending." The two married June 1960 and a daughter was born in November. Dern moved his family to Los Angeles and than tragedy occurred. While Bruce and Diane were out of the house, their 18-month old daughter, left in the care of a teenage maid, drowned in the swimming pool. It took the Dern's many years to come to terms with the accidental death of their daughter. In February 1967 their second daughter, Laura, was born. They decided to separate two months after she was born. The divorce was final in 1968 and Dern married ex-model, aspiring actress and widow, Andrea Beckett, whom he had met when he was teaching acting class in 1969. In 1990, they are still happily married. Laura grew closer to her father when she was a teenager and when she decided to pursue her acting career, Dern became a close confidante. He is an extremely proud father of his daughter's acting ability and talents and gradually reconciled with Diane through their mutual parenting cares.

Dern has been a runner since the age of 27 when he started keeping a log of his running activities. He has chalked up more than 250 career marathons. He runs seven miles a day, come rain or shine. His wife teases him about his compulsive personality. A financial wizard, he prefers to calculate his own financial papers. He continues to live in Malibu even though his home was destroyed by the Malibu floods in 1983.