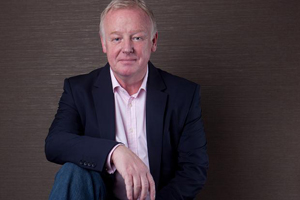 He was best known as the host of Family Fortunes for 15 years.

Dennis was born in Garston, Liverpool, Lancashire. His father worked in a betting shop after service in the Royal Navy during World War II and a period as a football player on the books of Liverpool F.C. (but did not play for the first team), whilst his mother worked in a factory.

He attended the Stockton Wood and Joseph Williams primary schools and then Quarry Bank High School after passing the Eleven plus exam.

He had a Saturday job in Burton's clothes store whilst still at school and started in entertainment as a stand-up comedian in working men's clubs.

As a comedian Dennis worked the North West social and working men's clubs. He was given his earliest opportunities by Liverpool based husband and wife theatrical agents Stuart and Dorene Gillespie ( Stuart and Dorene had been a successful act themselves in Variety ) and in his autobiography he credits them with discovering him.

His first radio appearance was in 1971 on Stuart's BBC Radio Merseyside series Variety Time (The programmes were taped in front of a live audience in Merseyside Clubs ).

In 1974, he won "New Faces", an ITV talent show and appeared on numerous light-entertainment shows. In 1982, he joined as one of the team on Russ Abbot's Madhouse and The Russ Abbot Show before forming a comedy partnership with fellow impressionist Dustin Gee, which in turn led to a series of their own, The Laughter Show.

Following Gee's death in 1986, Les carried on The Laughter Show as a solo performer and became the third host of Family Fortunes for a fifteen-year run from 1987 to 2002.

His theatre work included Amos Hart in Chicago, Bill Snibson in Me and My Girl in the West End. He had starred in Skylight at the Water Mill Theatre, Newbury, Berkshire; Mr Wonderful at the Gateway Theatre, Chester, Misery at the Coliseum Theatre, Oldham; toured in the play Just Between Ourselves and appeared with Janet Suzman in Cherished Disappointments In Love at London's Soho Theatre.

He starred with Christopher Cazenove and John Duttine in a national tour of 'Art' and as Norman Bartholomew in Anthony Shaffer's dark comedy Murderer at London's Menier Chocolate Factory. He also starred in a hit season in Neville's Island at Birmingham Repertory Theatre.

He appeared in the role of Mr. Fulton in "High School Musical 2" in a UK tour from late August 2009 to February 2010. He had also made an appearance on two episodes of Bang Bang, It's Reeves and Mortimer in The Club sketch, where he played himself.

He also took part in a video-only special of Shooting Stars in 1993, where Vic Reeves introduced him pronouncing his name as if it were French saying "Les Dennis, the French fire engine". He toured in Hairspray as Wilbur Turnblad alongside Michael Ball, Brian Conley and Michael Starke – who alternated the role of Edna Turnblad.

He is currently starring in the touring production of Legally Blonde The Musical playing the role of Professor Callahan.

Dennis' big screen debut was in the film Intimate Relations with Julie Walters, Rupert Graves and Laura Sadler and he appeared in the comedy feature film Large and in Wildlife, a short directed by Nick Allsop.

Dennis acted in soap operas Brookside, Merseybeat, Family Affairs, Casualty and the short-lived revival of Crossroads plus Hotel Babylon (for one episode).

Big Brother and beyond

Dennis appeared in the second series of the UK Celebrity Big Brother during the period when his marriage to Amanda Holden was breaking down again – he described his time in the BB House as "not one of his wisest moves", although he went on to finish as runner-up to Mark Owen.

On 11 August 2005 Dennis appeared as a guest star in an episode of the first series BBC-series Extras written by and starring Ricky Gervais and Stephen Merchant. In this appearance, Dennis portrayed a fictional version of himself, alongside Gerard Kelly, who played a camp theatre director, the recurring character Bunny.

In early 2006, Dennis presented and performed in BBC One's The Sound of Musicals and guested in New Street Law on BBC One.

In summer 2006, he played scriptwriter Nick Chase in a new comedy play called Marlon Brando's Corset, which toured the UK from July 2006, including a month-long run at the Edinburgh Fringe.

He appeared as a guest in August 2006 on the ITV drama series, The Bill starring as a man suspected of murdering his father. Dennis appeared alongside fellow former Russ Abbot performer Lisa Maxwell, who played D.I. Samantha Nixon in the series.

At the 2006 Edinburgh International Television Festival, it was announced Les would make a return to the gameshow genre, presenting a new big-money quiz show titled In the Grid for Channel 5. The show debuted on 30 October 2006. From April 2007, he also hosted UKTV Gold's TV Now and Then quiz show. The same month he guest starred on BBC One's Holby City.

He appeared on The Friday Night Project as a panellist on "Who knows the most about the guest host?" when Rupert Everett guest hosted. In theatre Les guest-starred as narrator in Side by Side by Sondheim at the Venue, London.

As one of the team, he completed running the Safaricom Marathon in Lewa to raise funds for the BBC Wildlife Fund, screened on BBC One's Saving Planet Earth in July 2007.

In August 2007, he starred in the hit play Certified Male- about the highs and lows of modern manhood – at the Edinburgh Festival. He then toured in The Servant of Two Masters, directed by Michael Bogdanov and at Christmas he returned to pantomime after a ten-year break, co-starring in Cinderella with Hollywood veteran Mickey Rooney at the Empire Theatre, Sunderland, produced by First Family Entertainment.

This section of a biography of a living person does not include any references or sources. Please help by adding reliable sources. Contentious material about living people that is unsourced or poorly sourced must be removed immediately. (February 2011)

Les Dennis' autobiography, Must The Show Go On?, was published by Orion in early 2008.

In April 2008, Dennis toured in Eurobeat Almost Eurovision prior to a West End season in the show. Also in 2008, he narrated the home video clip show on Challenge, Les Dennis's Home Video Heroes, and appeared in the ITV documentary Les Dennis' Liverpool, which was, coincidentally, broadcast a week after BBC Two ran Alexei Sayle's Liverpool, a three-part documentary on the city.

During Christmas 2008 panto season, Dennis appeared as Buttons in Cinderella at the Empire Theatre, Liverpool. The pantomime also featured Jennifer Ellison as Cinderella, and Cilla Black as the Fairy Godmother. At Christmas 2008, Les was featured on the Wombats' Christmas single and video Is This Christmas? in aid of MENCAP.

In 2009, Dennis played Herbert Soppitt in J.B. Priestley's When We Are Married at the West Yorkshire Playhouse, Leeds and the Playhouse, Liverpool. At Christmas 2009, he returned to the Liverpool Empire to appear in Peter Pan with Fonz actor Henry Winkler and again in 2010 to play the role of Aladdin's brother, Wishee Washee in Aladdin.

From 17 October 2011, Dennis was due to start a week-long stint in Countdown's Dictionary Corner.

In 2011 he again worked with Ricky Gervais and Stephen Merchant, with recurring appearances as a fictionalized version of himself in the Warwick Davis comedy series, “Life’s Too Short”.

In August 2012 he will be performing in the play Jigsy at the Assembly Rooms (Edinburgh) as part of the Edinburgh Fringe Festival.

Dennis married actress Amanda Holden on 4 June 1995. They had a temporary split in 2000 when Holden's affair with actor Neil Morrissey was exposed in the press, before eventually separating in December 2002 and divorcing in 2003.

Dennis met Claire Nicholson in 2005. The couple have a daughter, Eleanor Grace, who was born on 24 April 2008; Dennis and Nicholson were married on 23 November 2009 in Highgate. Their son Thomas Christopher was born on 14 April 2011.

Dennis is a Liverpool fan, despite the fact that his mother was a Manchester United supporter.