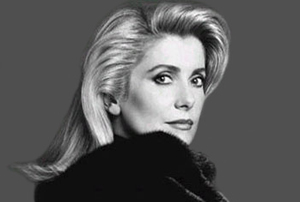 A model of French elegance, cultivated lust object for art house filmgoers everywhere, and one of the best-respected actresses in the French film industry, Catherine Deneuve made her reputation playing a series of beautiful ice maidens for directors such as Luis Buñuel and Roman Polanski.

The daughter of French stage and film actor Maurice Dorléac and actress Renée Deneuve, Deneuve was born Catherine Fabienne Dorléac, in Paris on October 22, 1943. She made her screen debut at the age of 13, with a role in the 1956 film Les Collegiennes, and went on to make a string of films with directors such as Roger Vadim (with whom she had a child) before getting her breakthrough role in Jaques Demy's charming musical, The Umbrellas of Cherbourg (1964).

The burst of stardom that accompanied her portrayal led to two of her archetypal ice maiden roles, first in Roman Polanski's terrifying Repulsion in 1965 and then in Buñuel's 1967 Belle de Jour. Deneuve's startling portrayal of an icy, sexually adventurous housewife in the latter film helped to establish her as one of the most remarkable and compelling actresses of her generation. She further demonstrated her talent that year in Demy's Umbrellas musical follow-up, Les Demoiselles de Rochefort, which she starred in with her sister, Françoise Dorléac.

Deneuve as Séverine with Pierre Clementi in Luis Buñuel's Belle de Jour. This character turned her into an international movie superstar and beauty icon.Deneuve continued to work steadily through the 1960s and 1970s in films such as the 1970 Tristana (her second collaboration with Buñuel) and A Slightly Pregnant Man (1973), in which she starred with her lover at the time, Marcello Mastrioanni. Despite or perhaps because of her stardom, Deneuve chose to avoid Hollywood, limiting her appearances in American films to The April Fools (1969) and Hustle (1975). Deneuve also did prolific work through the 1980s, appearing in such films as François Truffaut's Le Dernier Métro (1980) and Tony Scott's The Hunger (1983). The latter film saw Deneuve playing a bisexual vampire alongside David Bowie and Susan Sarandon, and her performance won her an indelible cult status in the States among lesbians, goths, and artistically inclined teenage boys.

In the 1990s, Deneuve garnered further international acclaim for her roles in several films, including the 1992 film Indochine (for which she won a César Award and received an Academy Award nomination for Best Actress) and two films directed by André Téchiné, Ma Saison Préférée (1993) and Les Voleurs (1995). In 1996, she paid homage to the director who had first given her fame by taking part in the documentary L'Univers de Jacques Demy. Closing out the final years of the 1990s Deneuve remained consistently working in numerous films; in 1999 alone she appeared in no less than five films: Est-ouest, Le temps retrouvé, Pola X, Belle-maman, and Le vent de la nuit, continuing to turn in compelling performances.

In 2000 Deneuve received much critical attention when cast alongside eccentric Icelandic singer Björk in the Lars von Trier's melancholy musical Dancer in the Dark. Though it polarized critics and audiences alike, Dancer in the Dark nevertheless won the Palme d'Or at the Cannes Film Festival.