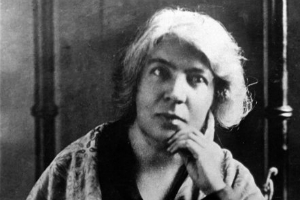 Born in Nuoro, Sardinia into a middle-class family, she attended elementary school and then was educated by a private tutor (a guest of one of her relatives) and moved on to study literature on her own.

She first published some novels in the magazine L'ultima moda when it still published works in prose and poetry. Nell'azzurro, published by Trevisani in 1890, might be considered as her first work.

Still between prose and poetry are, among the first works, Paesaggi sardi, published by Speirani in 1896. In 1900, after having married Palmiro Madesani, functionary of the Ministry of War met in Cagliari in the October 1899, the writer moved to Rome and after the publishing of Anime oneste in 1895 and of Il vecchio della montagna in 1900, plus the collaboration with magazines La Sardegna, Piccola rivista and Nuova Antologia, her work began to gain critical interest.

Cenere was the inspiration for a movie with the famous Italian actress Eleonora Duse.

Her work has been highly regarded by Luigi Capuana and Giovanni Verga plus some younger writers such as Enrico Thovez, Pietro Pancrazi, Renato Serra, and later until today by Sardinian writers such as Sergio Atzeni, Giulio Angioni, Salvatore Mannuzzu, starters of the so-called Sardinian Literary Spring.

Deledda's whole work is based on strong facts of love, pain and death upon which rests the feeling of sin and of an inevitable fatality.

In her works we can recognize the influence of the verism of Giovanni Verga and, sometimes, also that of the decadentism by Gabriele D'Annunzio.

In Deledda's novels there is always a strong connection between places and people, feelings and environment. The environment depicted is that one harsh of native Sardinia, but it is not depicted according to regional veristic schemes neither according to the otherworldly vision by D'Annunzio, but relived through the myth.