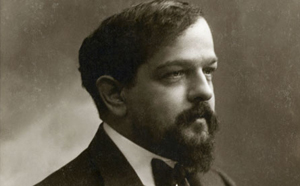 Along with Maurice Ravel he is considered the most prominent figure working within the style commonly referred to as Impressionist music, though he himself intensely disliked the term when applied to his compositions.

Debussy was not only among the most important of all French composers but also a central figure in all European music at the turn of the twentieth century. His music virtually defines the transition from late-Romantic music to twentieth century modernist music.

In French literary circles, the style of this period was known as Symbolism, a movement that directly inspired Debussy both as a composer and as an active cultural participant.

Debussy at the Villa Médici in Rome, 1885, at centre in the white jacketClaude Debussy was born in St. Germain-en-Laye in 1862. His father owned a china shop and his mother was a seamstress. Debussy began music instruction when he was seven years old. His talents soon became evident and at age ten Debussy entered the Paris Conservatoire. During Debussy's twelve years at the Paris Conservatoire beginning in 1872, he studied with Ernest Guiraud, César Franck and other significant figures of the era. From 1880 to 1882 He was employed by the patron of Tchaikovsky, Nadezhda von Meck, giving music lessons to her children.

As the winner of the Prix de Rome, he received a scholarship by the Académie des Beaux-Arts, which included a four-year residence at the Villa Medici, the French Academy in Rome to further his studies (1885-1887). According to letters from this period, Debussy often was depressed and unable to compose, but he also met Franz Liszt, and finally composed four pieces, which were sent to the Academy; the symphonic ode Zuleima, after Heinrich Heine, the orchestral piece Printemps, and the cantata La damoiselle élue (1887-1888), which was criticized by the Academy as "bizarre" and in which some stylistic features of Debussy's later style emerged for the first time. The fourth piece was the Fantaisie for piano and orchestra, which was still indebted to César Franck's music and withdrawn by the composer himself.

With his visits to Bayreuth (1888, 1889) Debussy was exposed to Wagnerian opera, which was to have a lasting impact on his later work. Wagner's influence is evident in the La damoiselle élue and the Cinq poèmes de Baudelaire (1889) but other songs of the period, notably the settings of Verlaine—Ariettes oubliées, Trois mélodies, Fêtes galantes—all are in a more capricious style.

Later, during 1889 the Exposition Universelle in Paris, Debussy heard Javanese gamelan music. Although direct citations of gamelan scales, melodies, rhythms, or ensemble textures have not been located in any of Debussy's own compositions, the equal-tempered pentatonic scale appears in his music of this time and afterward.

Beginning in the 1890s, Debussy developed his own musical language largely independent of Wagner's style and heavy emotionalism. In contrast to the enormous works of Wagner and other late-romantic composers, Debussy chose to write in smaller, more accessible forms. Debussy's String Quartet in G minor (1893) paved the way for his later, more daring harmonic exploration. In this work he utilised the Phrygian mode as well as less standard scales, such as the whole-tone, which creates a sense of floating, ethereal harmony.

The Suite bergamasque (1890) recalls rococo decorousness with a modern cynicism and puzzlement. This suite contains one of Debussy's most popular pieces, Clair de Lune.

Influenced by the contemporary symbolist poet Stéphane Mallarmé, Debussy wrote one of his most famous works, the revolutionary Prélude à l'après-midi d'un faune. In contrast to the large orchestras so favoured by late-romanticism, Debussy wrote this piece for a smaller ensemble, emphasizing instrumental colour and timbre. Despite Mallarmé himself, and colleague and friend Paul Dukas having been impressed by the piece, it was controversial at its premiere. Composer Camille Saint-Saëns thought it "pretty" but lacking any "style". Prélude subsequently placed Debussy into the spotlight as one of the leading composers of the era.

Middle works
The three Nocturnes (1899), include characteristic studies in veiled harmony and texture as demonstrated in Nuages; exuberance in Fêtes; and whole-tones Sirènes". La Mer (1903-1905) essays a more symphonic form, with a finale that works themes from the first movement, although the middle movement, Jeux de vagues, which proceeds much less directly and with more variety of colour. The three Images pour orchestre (1905-1911) are more loosely linked, and the largest, Ibéria, is itself a triptych medley of Spanish allusions and fleeting impressions.

In reaction to Wagner and his extremely elaborate late-romantic operas, Debussy wrote the symbolist opera Pelléas et Mélisande, which would be his only complete opera. Based on the play by Maurice Maeterlinck, the opera proved to be immensely influential to younger French composers, including Maurice Ravel. These works brought a fluidity of rhythm and colour quite new to Western music.

During this period Debussy wrote much for the piano. The set of pieces entitled Pour le piano (1901) utilises rich harmonies and textures which would later prove important in jazz music. His first volume of Images pour piano (1904–1905) combine harmonic innovation with poetic suggestion: Reflets dans l'eau is a musical description of rippling water; Hommage à Rameau, the second piece, is a slow and yearningly nostalgic. It takes as its inspiration a melody of from Jean-Philippe Rameau's, Castor et Pollux.

The evocative Estampes for piano (1903) give impressions of exotic locations. Debussy came into contact with Javanese gamelan music during the 1889 Paris Exposition Universelle. Pagodes is the directly inspired result, aiming for an evocation of the pentatonic structures employed by the Javanese music. Debussy wrote his famous Children's Corner Suite (1909) for his beloved daughter, whom he nicknamed Chou-chou. The suite recalls classicism—the opening piece Doctor Gradus ad Parnassum refers to Muzio Clementi's collection of instructional piano compositions Gradus ad Parnassum, as well as a new wave of rag-time music. In the popular final piece of the suite, Golliwog's Cakewalk, Debussy also pokes fun at Richard Wagner by mimicking the opening bars of Wagner's prelude to Tristan and Isolde.

The first book of Preludes (1910), twelve in total, proved to be his most successful work for piano. The Preludes are frequently compared to those of Chopin. Debussy's preludes are replete with rich, unusual and daring harmonies. They include the popular La Fille aux Cheveux de Lin (The Girl with the Flaxen Hair) and La Cathédrale Engloutie ("The Engulfed Cathedral"). Debussy wanted people to respond intuitively to these pieces and so he placed the titles at the end of each one in the hope that listeners would not make stereotype images as they listened.

The music for Gabriele d'Annunzio's mystery play Le martyre de St. Sébastien (1911), a lush and dramatic work and written in only two months, is remarkable in sustaining a late antique modal atmosphere that otherwise was touched only in relatively short piano pieces.

Debussy's harmonies and chord progressions frequently exploit dissonances without any formal resolution. Unlike in his earlier work, he no longer hides discords in lush harmonies. The forms are far more irregular and fragmented. The whole tone scale dominates much of Debussy's late music.

His two last volumes of works for the piano, the Études (1915) interprets similar varieties of style and texture purely as pianistic exercises and includes pieces that develop irregular form to an extreme as well as others influenced by the young Igor Stravinsky (a presence too in the suite En blanc et noir for two pianos, 1915). The rarefaction of these works is a feature of the last set of songs, the Trois poèmes de Mallarmé (1913), and of the Sonata for flute, viola and harp (1915), though the sonata and its companions also recapture the inquisitive Verlainian classicism.

With the sonatas of 1915–1917, there is a sudden shift in the style. These works recall Debussy's earlier music, in part, but also look forward, with leaner, simpler structures. Despite the thinner textures of the violin sonata (1917) there remains an undeniable richness in the chords themselves. This shift parallels the movement commonly known as neo-classicism which was to become popular after Debussy's death. Debussy planned a set of six sonatas, but this plan was cut short by his death in 1918 so that he only completed three (cello, flute-viola-harp and violin sonatas).

The last orchestral work by Debussy, the ballet Jeux (1912) written for Serge Diaghilev's Ballets Russes, contains some of his strangest harmonies and textures in a form that moves freely over its own field of motivic connection. At first Jeux was overshadowed by Igor Stravinsky's The Rite of Spring, composed in the same year as Jeux and premiered only two weeks later by the same ballet company. Decades later, composers such as Pierre Boulez and Jean Barraqué pointed out parallels to Anton Webern's serialism in this work. Other late stage works, including the ballets Khamma (1912) and La boîte à joujoux (1913) were left with the orchestration incomplete, and were later completed by Charles Koechlin and André Caplet, who also helped Debussy with the orchestration of Gigues (from Images pour orchestre) and Le martyre de St. Sébastien.

The second set of Preludes for piano (1913) features Debussy at his most avant-garde, sometimes utilising dissonant harmonies to evoke moods and images, especially in the mysterious Canope; the title refers to a burial urn which stood on Debussy's working desk and evokes a distant past. The pianist Claudio Arrau considered the piece to be one of Debussy's greatest preludes: "It's miraculous that he created, in so few notes, this kind of depth."

Private life
Debussy's private life was somewhat turbulent. He cohabited in Paris with Gabrielle Dupont for nine years before marrying her friend Rosalie Texier, a fashion model, in 1899. Dismayed by her intellectual limitations, he left Texier in 1904 for Emma Bardac, the mother of one of his students and wife of a Parisian banker. Texier, like Dupont before her, attempted suicide with a pistol. The scandal obliged Debussy and Bardac (already carrying his child) to flee to Folkestone, England, until the hysteria subsided. The couple were married in 1908. The child, a daughter (and the composer's only child), was named Claude-Emma, more affectionately known as Chou-Chou, the dedicatee of Debussy's Children's Corner suite. Claude-Emma outlived her father by scarcely a year, succumbing to the diphtheria epidemic of 1919.

Claude Debussy died in Paris on March 25, 1918 from colorectal cancer, having already survived one of the earliest colostomy operations ever performed, in 1916. He died in the midst of the German aerial and artillery bombardment of Paris during the Spring Offensive of World War I. At this time, the military situation in France was desperate, and circumstances did not permit his being paid the honour of a public funeral or ceremonious graveside orations. The funeral procession made its way through deserted streets as shells from the German guns ripped into his beloved city. It was just eight months before France would celebrate victory. He was interred in the Cimetière de Passy, and French culture has ever since celebrated Debussy as one of its most distinguished representatives.